Skip to content
HomeLatest NewsYes she is my voice. Maryam Nawaz admitted that her leaked audio was authentic
Spread the love
Talking about stopping advertisements while I was running the party’s media cell. PML-N Vice President Maryam Nawaz’s answer to the journalist’s question. 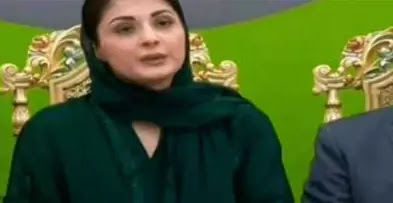 ISLAMABAD – PML-N Vice President Maryam Nawaz has admitted the leaked video of not giving advertisements to various TV channels. A press conference was held in Islamabad with him in which he was asked about the leaked video. Maryam Nawaz said that the audio was being played in my voice.
I will not say that it was fabricated, it was my voice that ordered the banning of advertisements. I said that while running the party’s media cell. Maryam Nawaz said that I will talk about this in detail later.

It should be noted that after former Chief Justice Saqib Nisar, an audiotape of Maryam Nawaz was also leaked in which she was instructed to stop advertisements of various channels.
This audiotape is from the PML-N era, which contains instructions given to Maryam Nawaz’s media team. In the alleged audio leak, Maryam Nawaz was directed to stop advertisements on several channels. In the audiotape, Maryam Nawaz said that no advertisement will be given to Twenty Four News, Ninety Two News, SAMAA, and ARY.
Following the alleged leak of the audiotape of PML-N Central Vice President Maryam Nawaz, various comments were being made on social media.
Social media users said that in the current era, there has been evidence of what those who are shouting for the ban on journalists and control of the media have been doing during their tenure.
Reacting after the alleged audiotape of PML-N central vice president Maryam Nawaz was leaked, Special Assistant Dr. Shahbaz Gul said that let’s see how free the press is now, now what press clubs issue statements on it.
Talking on audiotape, Dr. Shahbaz Gul said that if everyone remained silent then it would be proved that some people’s journalism is not free. He said that if everyone remained silent on this audiotape, it would prove that some people’s journalism is mortgaged to Maryam. Dr. Shahbaz Gul further said that if this was what the Pakistan Tehreek-e-Insaf (PTI) had done, then independent journalism would have condemned it till now.