What’s the difference in the nature of a donkey that grows up with dogs? You also know the interesting story - 10bmnews Skip to content 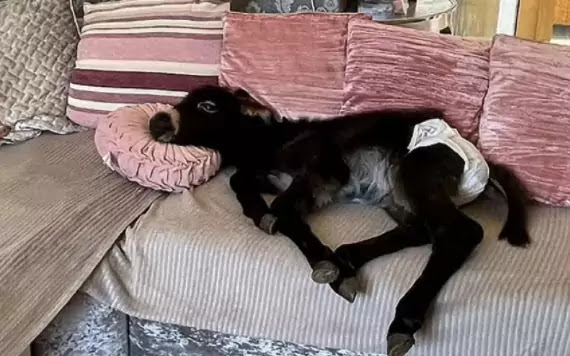 LONDON (Monitoring Desk) – There is a saying that a melon catches the color of a donkey when you see it, but there is such shocking news from the UK that a dog catches the color of a donkey and you will be stunned to hear it.
According to Mail Online, the donkey was born in the stable of a couple named John Nuttall and Grazina Provence, where they keep more than 70 donkeys. After the donkey was born, his mother refused to breastfeed him.
Whenever the child went to the mother, she would start beating him. Seeing this situation, Grazina took the child home with her so that she could take care of herself. For the next three months, the baby stayed at Grazina’s home with her pet dogs. Grazina wore a dog nappy and he would walk and play with the dogs all day and lie down on the couch indoors.
Grazina said that living with dogs has caused her to develop dog-eating habits. Now, although he has been transferred to the stable because he has started eating fodder, he still has the same habits.
The way I call a dog by whistling, it also runs when it blows a whistle, plays with the ball just like dogs, and runs along with me like a dog on a walk. Me and John They are often surprised that this baby donkey might consider himself a dog
Read more: The girl told me how to catch your partner’s infidelity which would send you to jail