Skip to content
Home Latest News What will be gained from the visit of Prime Minister Shahbaz Sharif to Saudi Arabia?
According to PML-N leader Musaddiq Malik, the Prime Minister will be accompanied by a 13-member delegation including Foreign, Information, Finance Ministers, and Foreign Secretary. 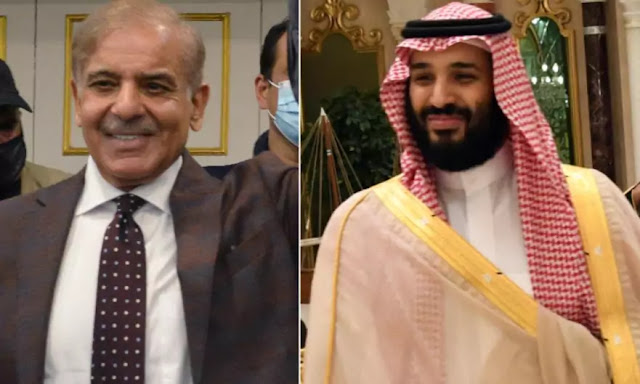 Prime Minister Shahbaz Sharif will visit Saudi Arabia from 28 to 30 April 2022 at the invitation of Crown Prince Muhammad bin Salman bin Abdulaziz of Saudi Arabia.
This will be the Prime Minister’s first overseas visit since taking office earlier this month, with a high-level delegation including key cabinet members accompanying the Prime Minister.
According to the schedule, the delegation will leave at 2 pm on Thursday and is scheduled to meet Crown Prince Muhammad bin Salman at dinner on the same night. After that, Umrah will be performed the next day and return home on April 30 at 6 pm.
A Pakistani Foreign Office spokesman said in a statement that during the visit, the Prime Minister called on the Saudi leadership to further enhance bilateral economic, trade, and investment relations, and to work with Pakistanis in Saudi Arabia. We will discuss creating new opportunities for the workforce 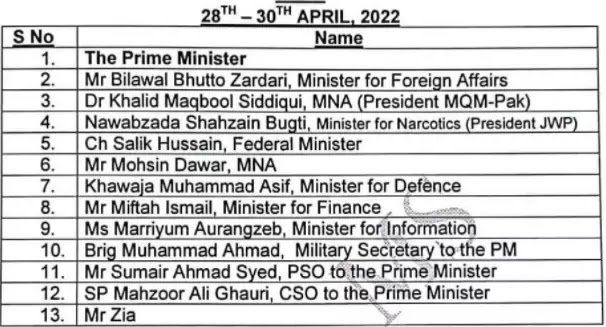 He said that a number of regional and international issues of mutual interest would also be discussed between the two countries.
It was further stated that the visit of the Prime Minister to Saudi Arabia would help further strengthen the bilateral cooperation in various fields and further expand the growing partnership between the two countries.
How to make a trip controversial?
According to a preliminary document released by the Foreign Office and the Prime Minister’s Office in Islamabad two days ago, a commercial flight was requested from PIA and an estimate of the cost was also sought.
A list of 84 members of the Sharif family, their personal servants, as well as government officials, ministers, and members of the coalition parties, accompanied by the Prime Minister, went on a pilgrimage to Saudi Arabia at the government’s expense. Ready.
Following criticism on social media on the list, Prime Minister Shahbaz Sharif refused to take his family and others with him, while coalition members also apologized for going on Umrah with the government delegation.
According to PML-N leader Musaddiq Malik, the Prime Minister will be accompanied by a 13-member delegation including Foreign, Information, Finance Ministers, Foreign Secretary, and other government officials.
Federal Minister for Information Maryam Aurangzeb on the questions raised during the visit of the Prime Minister said that when Shahbaz Sharif was the Chief Minister of Punjab he used to go abroad on an official visit at his own expense and this tradition was maintained even after he became the Prime Minister. Has kept He said he would buy tickets for the commercial flight himself
How will the visit benefit Pakistan?
Senior analyst Shaukat Paracha while talking to Independent Urdu said that this visit is very important in the context of Saudi Arabia and Pakistan. The Saudi leadership is not new to Mian Shahbaz Sharif, nor is Shahbaz Sharif new to Saudi leadership.
He said relations between the Saudi government and the previous government had soured after the first year, but now that the government had changed, Crown Prince Mohammed bin Salman had called Prime Minister Shahbaz Sharif to congratulate him. It happens that Saudi Arabia shows such warmth.
Shaukat Paracha said that this is a good opportunity for Pakistan to pave the way for economic cooperation. Saudi Arabia has three billion dollars in reserves with Pakistan and it is proposed to increase it to five billion dollars. In addition, it is proposed to increase the annual payment for oil to three years. Agreements on defense cooperation are also on the agenda.
Foreign Office Spokesman Asim Iftikhar said in a statement that Pakistan and Saudi Arabia have fraternal relations based on mutual trust and understanding, close cooperation, and adherence to the tradition of mutual support. He expressed that there is massive regard in the hearts of individuals of Pakistan for the two blessed hallowed places.
The spokesman said that the Prime Minister’s visit to Saudi Arabia would further strengthen the growing partnership between the two countries. The representative said that two-sided relations have been reinforced through close participation in provincial and worldwide gatherings.
There are more than two million Pakistanis living in Saudi Arabia who are playing a vital role in the development, prosperity, and economic development of the two brotherly countries.
Condemnation of Karachi attack
The Saudi Foreign Ministry has strongly condemned the recent bombings near a Chinese institute at Karachi University. In a statement issued from Riyadh, the ministry reiterated Saudi Arabia’s support for Pakistan in the fight against violence, extremism, and terrorism, and rejected Saudi Arabia’s criminal actions, which it said were based on all religious principles. And contradict moral and human values