Skip to content
HomeLatest NewsWhat is the fault of Maryam Nawaz Flats were given as a gift by father Islamabad High Court
Spread the love
Justice Amir Farooq and Justice Mohsin Akhtar Kayani repeatedly asked the NAB prosecutor to present any evidence before the court which could prove Maryam Nawaz’s ownership of Avenfield Apartments. 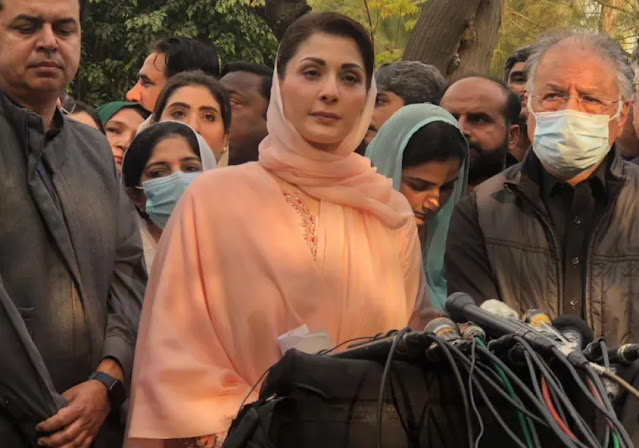 The National Accountability Bureau (NAB) on Wednesday sought time from the Islamabad High Court to present further evidence in the hearing of the appeal against the conviction of PML-N leader Maryam Nawaz in the Avenfield reference.
A division bench of the Islamabad High Court heard Maryam Nawaz’s appeal in which the NAB prosecutor presented 6,000 pages of evidence. Pakistan Muslim League-Nawaz Vice President Maryam Nawaz and her husband Captain Muhammad Safdar were present in the courtroom along with other PML-N leaders.
Justice Amir Farooq and Justice Mohsin Akhtar Kayani repeatedly asked the NAB prosecutor to present any evidence before the court which could prove Maryam Nawaz’s ownership of Avenfield Apartments.
The court said that in criminal cases, the prosecution has to prove its case first and then the accused gets a chance to clear himself. The judges were of the view that the NAB would have to present evidence that would prove without any doubt that Maryam Nawaz is the owner of Avenfield Apartments.
Justice Amir Farooq, while addressing the NAB prosecutor more than once, said that even if the Avenfield apartments were acquired from illegally acquired wealth, then what is the fault of Maryam Nawaz in this because these flats belonged to her father. Received as a gift from
The NAB prosecutor said that a letter received from the British Virgin Islands administration proves that Maryam Nawaz is the owner of the said property. He said that under NAB law, any document coming from abroad can be used as evidence.
On this, Justice Amir Farooq said that in the NAB law, a document coming from abroad has been made a part of the evidence, however, it will have to prove to what extent it is correct. Justice Mohsin Akhtar Kayani said that the document received from abroad would also be examined within the law of martyrdom of Pakistan.
The NAB prosecutor also referred to the correspondence between the Sharif family and some Pakistani institutions in which Maryam Nawaz allegedly accepted ownership of the Avenfield flats.
In response to this argument, Justice Mohsin Akhtar Kayani said that correspondence between certain institutions or individuals could not be presented as evidence and in case of doing so, the letter writers would be summoned in court as witnesses. The facts must be verified
Justice Amir Farooq on one occasion said that it is not illegal to have offshore companies and they own bearer certificates of owned companies. He added: We have to see who has the bearer certificates of the two companies.
On another occasion, Justice Amir Farooq said that the said properties were acquired in 1980 and Maryam may not have been born at that time.
In the courtroom, Maryam Nawaz said something in the ear of PML-N leader Muhammad Zubair, who was sitting next to her and sent a message to Maryam Nawaz’s lawyer Irfan Qadir, who told the court that in 1980, Maryam Nawaz was seven years old.
Justice Amir Farooq added that many of the owners of these properties may have changed by the time the Avenfield case was settled. He said that courts do not make decisions on the basis of public opinion or media reports but solid evidence is required especially in criminal cases.
Addressing the NAB prosecutor, Justice Mohsin Akhtar Kayani said: To prove the allegation. The NAB prosecutor said that he was writing down all the questions of the judges and would answer them at the next hearing.