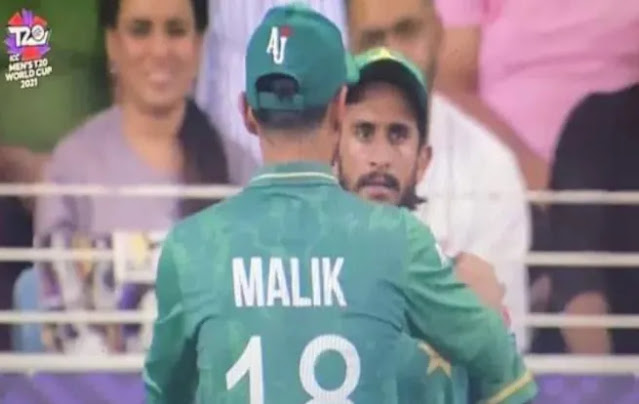 Dubai – Pakistan’s dream of reaching the final could not come true as fast bowler Hassan Ali dropped a catch on an important occasion. Hassan Ali is facing severe criticism on social media due to his Miss Fielding. As soon as he dropped the catch, he realized how much he had done wrong and how much he could suffer.
When Hassan Ali dropped Matthew Wade’s catch during the match, the problem was evident on his face. He not only regretted his mistake but also lost his temper but in such a situation senior player Shoaib Malik stepped forward and encouraged him. This move of Shoaib Malik is being appreciated by the former players.

Moment of the match, Hassan Ali dropped the catch and was feeling nervous then Shoaib Malik came forward and consoled him.#PAKvAUS #Pakistan pic.twitter.com/4rH1qpcEMv

While Hassan Ali is facing strong criticism for dropping the catch, he is also being supported by some social media users.

No one knows what Hassan Ali went through when he dropped that catch.
Be like Shoaib Malik.❤️#PAKvAUS #ICCT20WorldCup2021 pic.twitter.com/YYg3V42tOw

Remember that in the semi-final match, Australia defeated Pakistan by five wickets. The Australian team has already completed the target of 177 runs with six balls to spare. In the 19th over of the match, Hassan Ali dropped a catch to Matthew Wade, then he hit three sixes in a row on the next three balls to turn a definite defeat into a victory.

One of the best moments in #PAKvAUS when the legend #ShoaibMalik backed #HassanAli after dropping a difficult catch under pressure. Be like him. Aussies dropped catches as well. It’s just a game. pic.twitter.com/9WdcrBNcBK