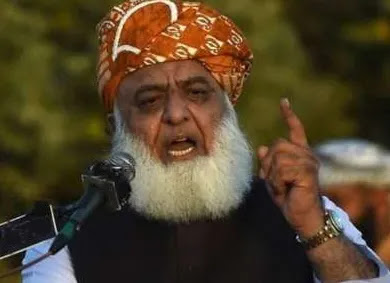 Karachi – JUI chief Maulana Fazlur Rehman says that electoral amendments are put on the tip of the shoe. November 17 was the darkest day in the history of Pakistan. Addressing the Ulema Convention, he said that the electoral system is being controlled. The system of coercion is not acceptable. Fake government and the fake majority will give us electoral reforms.
They do not recognize the legislation passed in the parliament through coercion. He said that we were given the message to spend with Imran Khan. Many people pile up on the ministry. Even today, the two major world economies are in competition with each other, but in this environment, we have to consider our national and collective interests.
We’ve spent 70 years in American slavery and Europe’s economy, we have to travel to a new future he said.
He said that we have been saying for 70 years that China is a friend of Pakistan. When Beijing started its new future, it started from the land of Pakistan and JUI-F had a role in it.
Maulana Fazlur Rehman said that when I was the chairman of the foreign affairs committee, our committee was invited and negotiations continued for a week and they declared some cities of the country as free economic zones in response to which we demanded that Make Xinjiang a high-rise city as a free economic zone so that your trade routes can be opened through Pakistan.
China accepted our offer and the 70-year-old friendship turned into an economic one,” he said. Referring to the Pak-China Economic Corridor (CPEC), the JUI-F chief said that roads and industrial zones would be constructed in the country from Gilgit to Gwadar for which 17,000 MW of electricity was required but where did so much electricity come from?
Maulana Fazlur Rehman said that the C-Pack project was destroyed, a 126-day sit-in was called using Imran Khan during the tenure of former Prime Minister Nawaz Sharif, as a result of which the Chinese President had to postpone his visit to the United States. And it was a great success for Europe