Skip to content
HomeLatest NewsWe have to break the cycle of oppression for women
Spread the love
The step the family of the slain woman is taking now. If they had taken the same step when the woman first heard the taunts about the birth of her daughter, then perhaps she would be alive today. 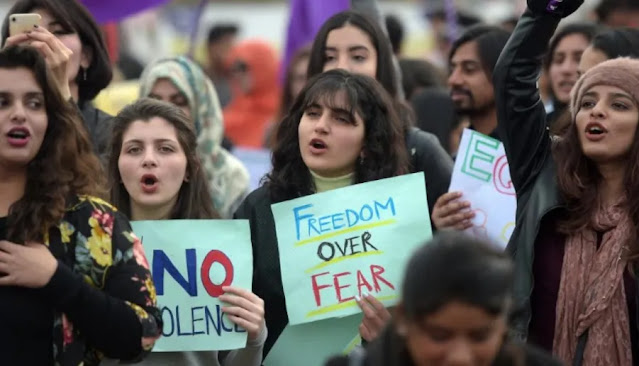 A few days ago, in Narowal, Punjab, a man with the help of his mother killed his pregnant wife two days before the birth of his third daughter. According to Dawn, the victim’s brother told police that his sister was mocked and harassed by her mother-in-law and husband for having daughters.
He told the police that his brother-in-law had earlier lost two of his sister’s pregnancies when he came to know about her.
Police have registered a case against the accused.
If the pictures of the woman or her daughters crying at her funeral have not come up on social media, then there is Justice for … The trend is not running.
The media has covered it accordingly. The reporter of the organization who filed the news published the news. He who did not do it ignored it.
Just like the victim and her family had ignored everything and every injustice before that.
Hoping for better days and their change.
Maybe even bring a gift or an amulet from somewhere and try it.
Maybe someone even asked to talk to them.
They may even get to see better days in return for these efforts.
The day when her husband and mother-in-law get along well with her and their daughters but how long will it last?
Good days will pass and then bad days will come.
The bad thing about days is that they change but humans do not change.
No matter how many veils a person puts on himself, one day he throws off the veils lying on himself and comes to his origin.
Then a cycle begins. A cycle of oppression that has no beginning and no end. He just keeps walking.
This cycle is bound to break anyway.
Unfortunately, in our society, it is often broken by the oppressor.
The oppressed do not tire of enduring oppression. The oppressor gets tired of doing oppression. Then he makes his last blow and breaks the circle and goes out.
By then it is too late. As has happened in this case.
The step that the woman’s family is taking now If they had taken the same step when the woman first heard the taunts about the birth of her daughter, then perhaps she would be alive today.
But how do they take action?
We left no room for them to take action.
We have considered a woman’s life as her marriage.
Let him get married, let him get married soon, and then let him endure every injustice that happens in this marriage.
We consider such a woman to be an ideal woman.
Nowadays, Mahira Khan is playing the role of such an ideal woman in ‘Where We Were True’. Her character was very strong at the beginning of the play but she has become miserable after marriage.
Before marriage, she used to respond to every sarcasm. The cousin pulls the car out in front of them. They sit on the roof of the bus and go to college
When the cousin raises her hand to slap, she grabs his hand and warns him. After marriage, if the husband imposes unnecessary restrictions on them, then they quietly bow down before him.
He says you will not go out of the house. Will not associate with anyone. Will not pick up the phone Will not read further Will not buy new things. Will not use money
They accept every restriction as a sign of their destiny and destiny. As a result, she is slowly becoming a psychiatrist
We love this concept of the ideal woman so much that we have not created a support system for women socially nor have we done anything for them at the governmental level that they can use to break these cycles of oppression.
They are forced to endure oppression in their own cycles.
We have to break this cycle for them.
For that, we must do what we can on our individual level. Whether it is to keep one’s mouth shut in the case of others or to make people realize that they are wrong or to march for a change in social thinking or the government’s focus on atrocities against women. Do it
As long as we as individuals do not talk about breaking these cycles, our women will continue to endure the oppression of these cycles and we will be able to do nothing for them except regret.