Skip to content
Home Latest News Voting is a constitutional right of members. Chief Justice of Pakistan
Whichever political party wants to show strength inside the parliament, it would be better to fight the battle of the assembly inside the assembly. Remarks by Chief Justice Umar Ata Bandial during the hearing of SC Bar’s request to stop meeting in Red Zone 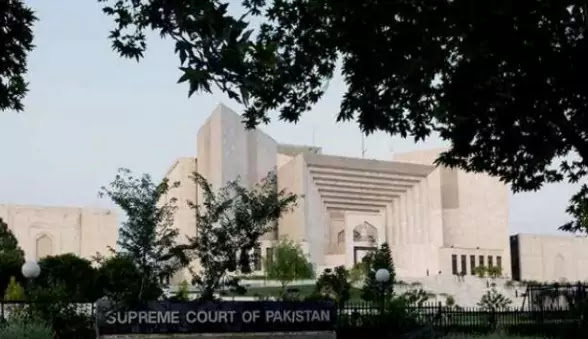 ISLAMABAD – A two-member bench headed by Chief Justice of Pakistan (JCP) in the Supreme Court of Pakistan (SC) on Monday heard a petition seeking a stay of political meetings before the no-confidence motion. The court is hearing the bar’s request. Supreme Court bar counsel Mansoor Usmani appeared in the court.
Chief Justice of Pakistan Omar Ata Bandial said that we will not go through the procedure. We do not want to interfere in the parliamentary proceedings. Mansoor Usmani said that notice has also been issued on the no-confidence motion. Is bound
March 22 marks the completion of 14 days. The Chief Justice remarked that the matter is an internal matter of the Assembly. Let the matter be fought within the Assembly.
The court has not yet been persuaded to interfere in the proceedings of the assembly. The court only wants no one’s right to vote to be affected. All these points can be raised before the speaker. Farooq H Naik said that the Speaker violated the Constitution by violating the Constitution.
The Chief Justice smiled at Farooq H Naik’s remarks on Article 6. The Chief Justice said that the issue of a no-confidence motion should also be settled in accordance with the constitution.
Right, the court has to see that no one’s rights are affected. Advocate Bar of the Supreme Court said that violation of Rule 37 will not be just an irregularity. Justice Muneeb Akhtar said that under Article 17, a political party has rights. Under 95, the right to vote belongs to the political party