Skip to content
HomeLatest NewsVideo of police constable’s obscene behavior with children went viral on social media
Spread the love
Constable Daniel was suspended and arrested, and a case was registered against the accused 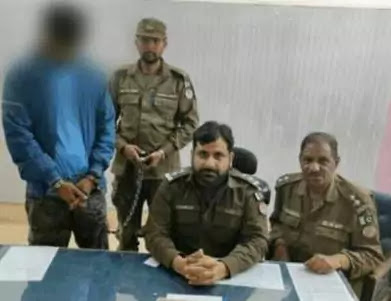 Vehari – Video of police constable’s child misbehavior went viral on social media. Case No. 615 was registered against accused Daniel at the instigation of SHO Ashraf Gul in Thangi police station and legal action was initiated.
According to police sources, a report has been sent to the Multan Police Constabulary for departmental action against Daniel. The accused has been arrested in this regard. DPO Vehari Amir Abdullah Khan Niazi has taken notice of the issue of immoral videos on social media.
Constable Daniel has been suspended and a case has been registered. The accused has been arrested and remanded in custody. DPO Ameer Abdullah Khan Niazi says that there is no place in the department for the employees who have brought the police department into disrepute.

The influential accused, on the other hand, allegedly tried to rape a 15-year-old boy. Ismail of Baghiana near Allahabad submitted a written request to the local police that accused Zakaria Dogar of forcibly taking my 15-year-old son Naeem into the room and trying to rape him.
After submitting the application to the police station, the armed accused along with his accomplices climbed the outer wall and entered the house, and continued torturing the family members. The victim’s family has demanded justice from DPO Kasur.