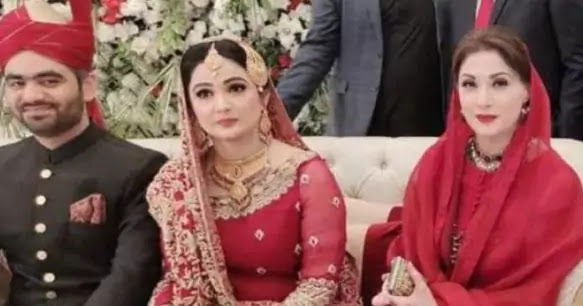 It is reported that the PML-N Vice President congratulated the bride and groom on the beginning of new life while Maryam Nawaz was accompanied by Maryam Aurangzeb, Uzma Bukhari, and other party leaders.

It may be recalled that Sania Ashiq has been a member of the Punjab Provincial Assembly since August 2018. At the age of 25, she became the youngest member of the Punjab Assembly to be elected in the 2018 General Elections. She was elected to the Punjab Provincial Assembly as the PML-N candidate for the reserved seat.
It may be recalled that PML-N MPA from Punjab Sania Ashiq was also the victim of a fake leaked video scandal. In this regard, PML-N MPA Sania Ashiq filed a petition in FIA Cyber ​​Crime Wing Pakistan.
In which he said that a video attributed to him was shared on Tik Tak and other social media platforms, followed by a ‘questionable’ video circulating on social media and a video attributed to Sania Ashiq. When the forensic report came out, it became clear that this video was not of Sania Ashiq