Skip to content
HomeInternational NewsUS position on China’s sovereignty has not changed President Biden
Spread the love
This is the third time that President Biden has apparently denied US policy and given the impression that he is stepping up his support for Taiwan. 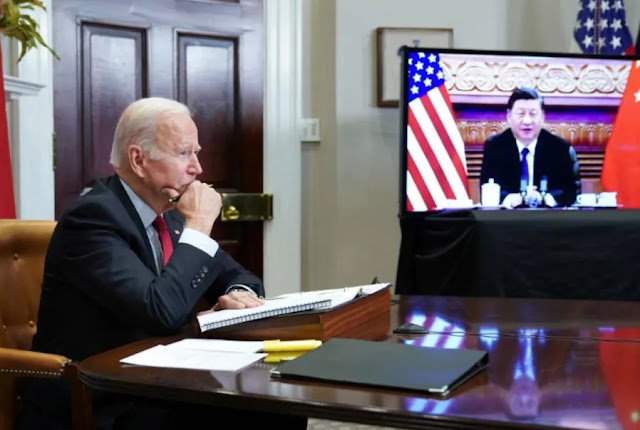 US President Joe Biden has clarified his statement calling Taiwan “seemingly” independent, saying that the US position on China’s sovereignty has not changed.
The latest in a series of mixed statements about Taiwan comes a day after an online meeting between the US and Chinese presidents, according to AFP. It should be noted that Taiwan is a democratic country outside the jurisdiction of China, of which China claims to be a part.
Asked if there had been any progress in the virtual meeting with the Chinese president on the Taiwan issue, which has close ties with the United States at the informal level, Biden said he “very clearly” supports existing US law on the issue. The United States does not recognize Taiwan’s independence under the Taiwan Act but is committed to assisting in its defense.
However, Biden, who arrived in New Hampshire on Tuesday, told reporters: Taiwan is free. He makes his own decisions. The White House did not respond to a request for comment on what Biden said about Taiwan.
However, Biden himself made it clear to reporters that he did not mean a change in US policy toward Taiwan. We are not changing our policy at all Biden said. We are asking them to do what is required under the Taiwan Act. That’s what we’re doing. Let them make up their minds.
This is the third time that Biden has publicly denied US policy and given the impression that he is tightening his grip on Taiwan. When asked in October if the United States would defend Taiwan against China, he said, “Yes, we have made that promise.
He made similar comments in August. Both times, the White House later explained that US policy had not changed. At a time when the United States is assisting Taiwan in its defense, the question of whether US forces will ever intervene in Taiwan’s affairs, Washington calls its policy a strategic ambiguity.
Speaking to reporters on Tuesday, Biden said he had urged Chinese President Xi Jinping to allow access to the South China Sea in the event that US naval vessels remain outside China’s territorial waters. We will not be intimidated
On the other hand, the US State Department says that Washington appreciates the “progress” of the media working in China
The United States said on Tuesday that progress had been made in talks with Chinese officials on improving working conditions and access to journalists working in China. The United States has regularly condemned the treatment of journalists working in China and has taken action against media outlets operating in the United States.
Chinese media have been accused of being Beijing’s propaganda machinery. In 2020, China expelled American journalists working for the New York Times, the Washington Post, and The Wall Street Journal.
A US State Department spokesman said on Tuesday that talks in recent months had led to “early progress” on “a few environmental issues” related to the media. The spokesman said: “We welcome this development but see it as only a preliminary step.” He will continue to emphasize journalism.
The U.S. official said that China had promised to issue visas to the group of American journalists, but that they would have to comply with all laws and regulations. The US official added that China has also promised to allow American journalists already in the country to come and go freely. Earlier, American journalists were not allowed to do so.
According to a US official, China has also said that it will extend the visa period for American journalists to one year. In response, Washington will do the same. The State Department believes that the steps taken in the context of the US-China summit will enable US media representatives to return to China to continue their “essential work.