Skip to content
Home Latest News There is a lot of baseless propaganda against Islam in the world Prime Minister
More than 80,000 Pakistanis have lost their lives in the war on terror. Instability in Afghanistan will affect the whole world. Imran Khan addresses OIC Foreign Ministers’ Meeting 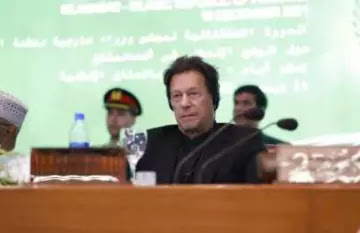 ISLAMABAD – Prime Minister Imran Khan has said that there is a lot of baseless propaganda against Islam in the world, Islamophobia is a very important issue and the people of Palestine and Kashmir are also looking at us.
Pakistan has experienced the most because of the circumstance in Afghanistan. Instability in Afghanistan will affect the whole world. The silence of the world on the Afghan issue is regrettable.
According to details, addressing the OIC Foreign Ministers’ Meeting, he said that he welcomes all the distinguished guests in Pakistan, Afghanistan has been a victim of 40 years of civil war and foreign aid to Afghanistan has stopped.
The problems faced by the Afghan people have not been raised by the people of any other country and 40 million people of Afghanistan are facing a crisis.
The issues of women and human rights in Afghanistan need to be addressed sensitively. Due to which Pakistan suffered the most, more than 80,000 Pakistanis sacrificed their lives in the war on terror.
Helping Afghanistan is our religious responsibility and the world needs to understand Afghan culture Imran Khan said. Afghanistan’s banking system is stagnant and if the world does not help
Afghanistan then it will be a huge man-made crisis, the Afghan population is falling below the poverty line and the situation in Afghanistan is very serious.
Has adopted, immediate steps must be taken to help the Afghan people, the world’s silence on the Afghan issue is regrettable