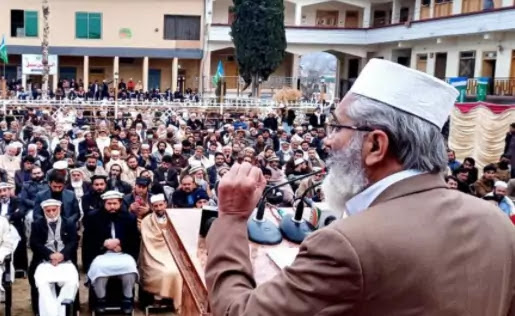 Temer knot – Amir Jamaat-e-Islami Siraj-ul-Haq has said that the tsunami was just a storm of claims and announcements which has devastated the country. If the government does not try to flee, the people will not remain silent on injustice and oppression, the present as well as the former rulers will have to be held accountable for what they have done, PTI, PML-N, and PPP feudal lords, capitalists, and vassals.
There are parties, brothers and sisters, uncles, nephews, fathers and sons, the time of hereditary politics is over, the nation has woken up and wants Islamic system in the country, mini-budget will be rejected, full scale protests Nowhere to be seen, people in Murree kept dying in the cold and the Punjab government and its machinery continued to enjoy the dream rabbit, the rulers admitted that they are slaves of America But the government has no right, the World Bank and the IMF have to run the economy, so what are the rulers sitting in the houses doing? The government is responsible for billions of dollars.
Where did the debt of the people go? The blood and sweat of the people are not earned for the luxuries and interests of the rulers, the people are no longer able to afford the house, it is time to say goodbye to the IMF and its follower’s Prices of pulses and medicines have increased by more than three and a half percent in the last three and a half years. The storm of unemployment is uncontrollable. We are a democratic party and by the grace of Allah we will carry out a peaceful Islamic revolution with the strength of the people.
Addressing the local body convention in Timergara Dirpain, Siraj-ul-Haq said that PTI would face more humiliation in the next phase of local body elections in KP. The people of the province are ready to say goodbye to the PTI which has been in power for eight years now.
Pakistan was supposed to be the land of Islam but the coin of the West and its followers is running here. League, PPP, and military dictators dreamed of the people but destroyed the country’s institutions and economy, now PTI is lying on lies, the Prime Minister to account for what worked for the welfare of the people in three and a half years. ?
Conspiracies are being hatched against Islamic ideological Pakistan. The money budget is being imposed. I ask the rulers what is the relationship between interest and Islamic State? Rulers tell what is the deal with the Islamic State measures to corrupt the family system? The time has come for the people to decide and reject the tried and tested. Supporting the oppressor is tantamount to participating in the oppression
Siraj-ul-Haq said that Jamaat-e-Islami is a democratic party, it has nothing to do with our inheritance. Name not found. He said that after coming to power, Jamaat-e-Islami will make the country a truly Islamic welfare state.