Skip to content
HomeLatest NewsThe three-year performance of Muttahida Ulema Board under the chairmanship of Allama Tahir-ul-Ashrafi.
Spread the love 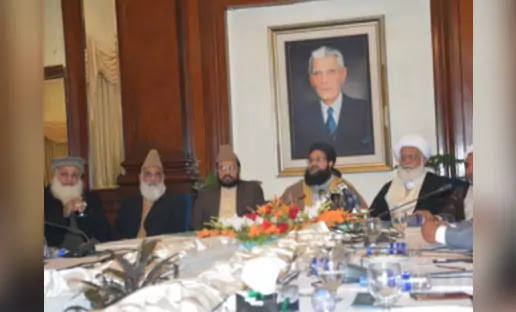 Lahore – The Muttahida Ulema Board has played a significant role in promoting interfaith and inter-religious harmony in the country and eradicating sectarian violence and extremism. Scholars, great leaders, muezzins, imams preachers, and teachers of Arab madrassas are thanked for the special arrangements made. And interfaith harmony will only come when dialogue and tolerance are promoted from the local level to the center.
This was stated by Chairman Muttahida Ulema Board and Pakistan Ulema Council and Special Representative of the Prime Minister of Pakistan for Interfaith Harmony and Middle East Hafiz Muhammad Tahir Mahmood Ashrafi while addressing a press conference. Maulana Ziaullah Shah Bukhari, Mohtarma Naira Andalib, Maulana Usman Afzal Qadri, Maulana Zafarullah Shafiq, Maulana Abdul Wahab Rupari, Maulana Muhammad Hussain Akbar, Allama Arif Hussain Wahidi, Maulana Hassan Naqib-ur-Rehman, Pir Rashid Shamim, Maulana Muhammad Khan Leghari, Maulana Sarfraz Ahmad Khan, Dr. Shahida Parveen, Maulana Zakir-ur-Rehman, Dr. Saima Farooq, Maulana Muhammad Afzal Haideri, Saira Bano and others were also present.
The Muttahida Ulema Board was established in 1997 with the primary objective of consulting with scholars and leaders of all schools of thought for the elimination of sectarian violence and extremism and to guide the government, judiciary, and institutions against such written and spoken material. Sectarian violence, extremism, and terrorism may be strengthened or may lead to sectarian prejudice and violence in the country. (Remember Muttahida Ulema Board is an honorary body). Muttahida Ulema Board under the chairmanship of Hafiz Muhammad Tahir Mahmood Ashrafi has played a full role since 19 February 2019 Consultation with Ulemas and Mashaikhs across the province for full implementation of the Code of Conduct, restoration of law and order in sensitive places before Muharram, consultation with all parties, efforts to implement it with the promotion and dissemination of the message of Pakistan This includes bringing a consensus on sensitive religious issues before the nation The performance of the present era has been unparalleled and the efforts made by the Chairman and members of the Board in this regard morning and evening are commendable and commendable.
The Muttahida Ulema Board has decided on 68 cases of past periods which were postponed since 2014. In the present period, 140 cases have been decided, bringing the total number to 208. More than decisions have been made, 326 textbooks have been cleared, and thank God these textbooks do not contain any material against any place, any sect, or religion. During this period, 39 meetings were held.
Similarly, a grievance cell and liaison cell were set up in the Muttahida Ulema Board for resolving the issues of Ulemas, Mashaikhs, and leaders of other religions. For the first time, the Muttahida Ulema Board held 12 meetings with the leaders of other religions and tried to resolve their issues. Resolved in style and that is why the law of blasphemy and blasphemy has been wrong for more than a year now. Not a single usage complaint was received.
More than 30 cases have been resolved through dialogue and negotiation. The Chairman and members of the United Ulema Board have not kept anything secret and in this regard, more than 27 press conferences and briefings have been arranged for the media.
Praise be to Allah, the performance of the Muttahida Ulema Board was appreciated not only in Punjab but also in the country and abroad. He thanked the United Ulema Board, Chief Minister Punjab Sardar Usman Bazdar, Speaker Punjab Assembly Chaudhry Pervez Elahi and all government officials and Chief Justice of Pakistan, Chief Justice Lahore High Court, National Security Agency, Punjab Police, CTD, Thank you for the full cooperation of the intelligence agencies