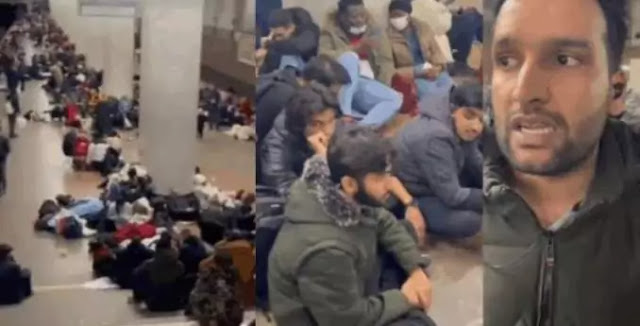 ISLAMABAD -The Foreign Ministry on Sunday temporarily postponed the departure of a flight, leaving the repatriation of more than 2,000 Pakistanis stranded in Ukraine pending. According to media reports, the flight for the repatriation of Pakistanis stranded in Ukraine has been temporarily postponed.
Express News has been instructed by the Ministry of Foreign Affairs to suspend the flight for the following reasons, according to a source in the Ministry of Foreign Affairs. The flight for repatriation of existing Pakistanis can be operated from any airport including Karachi, Islamabad, or Lahore.
It is believed that Pakistanis stranded in Ukraine had appealed to Prime Minister Imran Khan for help. A Pakistani student named Gulraiz Humayun said in a video statement that the embassy did not help us in any way. Students from other countries were evacuated safely. Yes, we have taken shelter in the metro station, food and water are not available, our condition is non-existent, we have become destitute here, it is not possible to spend more here, we request the Pakistani ambassador to get us out of here as soon as possible. Remove as soon as possible

Another student said I am a fourth-year student in Ukraine. The situation here is very serious. We were not helped by the embassy. All of us students booked 3,000 tickets. Tickets. After booking, when we started to go to Kyiv, two hours ago, there were calls from the embassy saying don’t come here, this is not a safe city, you come to Trincomalee, all the students are here Has not been removed from here yet

According to media reports, more than 500 Pakistani students are also studying in Ukraine, while many Pakistanis have also gone there for business and work, who are now stranded there due to the tense situation because of air service in Ukraine. Suspended, due to which Pakistanis who want to return and have a ticket can not return, they will have to wait until the air service is restored or special plane Pakistan Don’t go and bring them