Skip to content
Home Latest News The process of disintegration also started among the members of the provincial assembly of the Tareen group
Group 5 MPAs meet Punjab CM, re-contacted due to non-guarantee of tickets 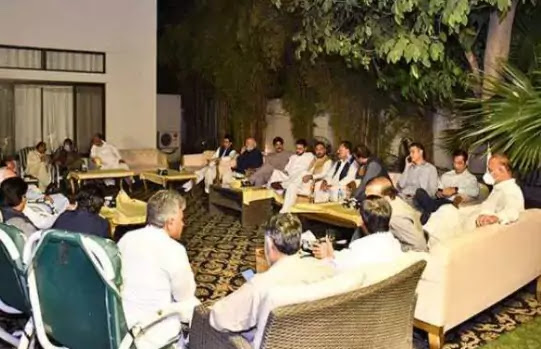 Lahore – Members of the Provincial Assembly of Tarin Group also fell victim to the rift. The process of disintegration has also started in the provincial assembly members of the last group after MNAs. 5 MPAs of the group have met Punjab Chief Minister Usman Bazdar.
According to well-known journalist Naeem Ashraf Butt, these meetings took place in Lahore during the last two days.
According to sources, the meeting with Hamza Shahbaz’s Tarin group was disappointing. An MPA Tarin group said that they thought that Hamza Shahbaz would promise tickets but it did not happen.
According to reports, more members of the group may meet the Punjab Chief Minister in the next two days. In addition, the group had decided not to attend the Punjab cabinet meeting.
According to media reports, the leader of the group Aun Chaudhry said. Our group is adamant about the demand for the replacement of Punjab Chief Minister Usman Bazdar and the group will not attend the Punjab Cabinet meeting.
Aun Chaudhry said that the cabinet meeting will be chaired by Usman Bazdar due to which no member will attend the meeting. Presenting a long list of reservations to the government team, 17 members of the Tareen group said that they do not want to leave the party but Usman Bazdar will have to be deducted. Was informed