Skip to content
Home Latest News The PDM will not march on March 23
The PDM decided that for the time being, it should be announced that March 23 will be March, it will benefit us two or three times, our pressure will be on the institutions and the government in the local body elections. Senior Journalist Rana Azeem 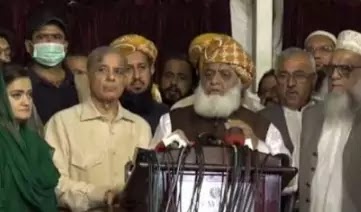 Islamabad – Senior journalist Rana Azeem says that it is clear that PDM will not have a march on March 23. According to the report of 92 News, further said that PDM An important person in the meeting has said that if we march before March 23, then the same date will come. If we do it later, then Ramadan Sharif will come.
Then the decision is to announce now that March 23 will be March. This will benefit us two or three, one will be our pressure on the institutions and the government in the local body elections.
PML-N leader Rana in the program. Tanveer has said that government ministers speak in a completely contradictory manner that has nothing to do with reality.
It may be recalled that a summit of PDM parties was held under the chairmanship of President Pakistan Democratic Movement Maulana Fazlur Rehman. At the summit, Shahid Khaqan Abbasi presented 8 recommendations of the steering committee. It was decided at the meeting that the PDM had agreed not to change the date of the Long March. The PDM Long March will be held on March 23 only.
It was suggested in the meeting that if the PPP wants to participate in the long march of PDM, then permission should be given. It is to be explained that the country is as dear to the opposition as it is to Imran Khan.
On March 23 half of Islamabad will be under someone else’s control. Jambars will also be set up. There is also a threat of terrorism and corona. Politics continues. The government should make a statement together with the opposition against terrorism.
On January 22, Interior Minister Sheikh Rashid had said that the opposition should consider the decision of the long march. Hundreds of guests are coming to the OIC meeting. They will participate in the parade on March 23. Do it the day before or after