Skip to content
Home Latest News The Pakistan Peoples Party launched a long march against the government
Imran Khan robbed the people of their votes and stomachs. Our walk is a presentation of the battle against the public authority. It is time to go to the puppet’s house. Bilawal Bhutto Zardari’s inaugural address to the workers at Mazar-e-Quaid 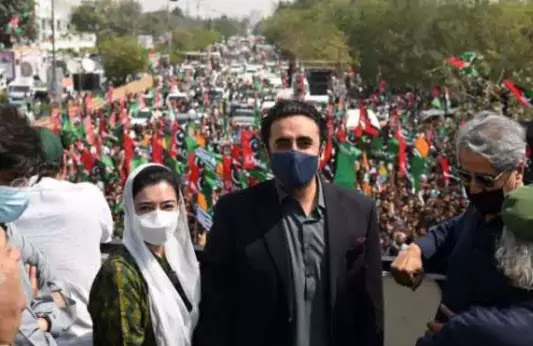 Karachi – Pakistan Peoples Party has started a long march against the government. Bilawal Bhutto Zardari addressed the workers at Mazar-e-Quaid According to details, the PPP started a long march against the government from Mazar-e-Quaid in Karachi, where addressing the workers, Chairman PPP Bilawal Bhutto Zardari said that enough is enough, after three years, now the selected will have to go home. , Imran Khan robbed the people’s vote and stomach ‘Our march is a declaration of war against the government’ It is time to go to the puppet’s house.
He said that Imran Khan’s government is the most corrupt government which promised to eradicate corruption but during Imran Khan’s rule all records of corruption have been broken. Incompetent Niazi destroyed the economy of the country. The puppets have to go home. The people of Karachi have been forced to protest against the puppets. They will oust Niazi and bring a democratic system.
It has been reported that according to the Pakistan Peoples Party, their long march will reach Islamabad in 34 days from 34 cities, for which hundreds of workers reached Mazar-e-Quaid in many vehicles from the city and different pieces of the country.
They carried party flags and chanted slogans in favor of the party and against the government. Earlier, Maulana Fazlur Rehman, head of the Pakistan Democratic Movement, and Asif Ali Zardari, co-chairman of the Pakistan People’s Party, had a telephone conversation. The long march started by PPP today was also discussed in the phone contact