Skip to content
Home Latest News The number of members is complete. Everyone is in touch. They will unite soon Pervez Elahi
Insha, Allah’s victory will be ours, Chaudhry Shujaat Hussain also believes. PML-Q leadership and Punjab Governor Omar Sarfraz Cheema in a meeting 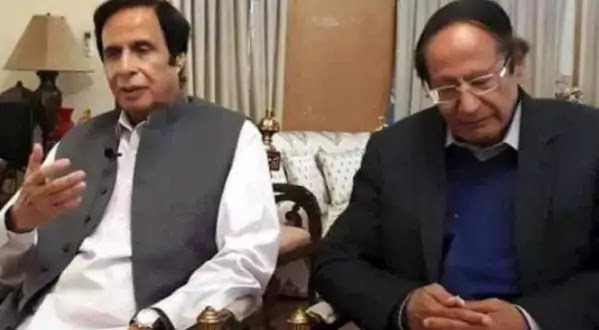 LAHORE – Pakistan Tehreek-e-Insaf (PTI) Punjab Chief Ministerial candidate Chaudhry Pervaiz Elahi has said that the number of members is complete. According to details, Punjab Governor Omar Sarfraz Cheema called on PML-N chief Chaudhry Shujaat and Pervez Elahi and discussed the election of the new Punjab Chief Minister. PML-Q chief Chaudhry Shujaat Hussain said on the occasion. Insha’Allah, victory will be ours.
On this occasion, Chaudhry Pervaiz Elahi said that the number of our members is complete, everyone is in touch and we will be united soon. In the meeting, Punjab Governor Omar Sarfraz Cheema said that PTI would fully support Pervez Elahi as the Chief Minister of Punjab.
Meanwhile, the Lahore High Court directed the parties to resolve the issue today through mutual consultation for the election of the Punjab Chief Minister.
Chief Justice Amir Bhatti heard the petition of Deputy Speaker Dost Mazari against the adjournment of the Punjab Assembly session Chief Justice Lahore High Court said that it remains to be seen whether the meeting of the Punjab Assembly can be suspended this way? Is there any violation of procedure in the election of the Chief Minister? What is the procedure for the selection of the Chief Minister?
In response, the Secretary Punjab Assembly said that the Chief Minister resigned on April 1 and the candidates submitted their applications on April 2, after scrutiny the nomination papers were accepted, called for voting on April 3 There was a commotion in the Punjab Assembly on that day on which the meeting was adjourned till April 6, after which on April 5 the Deputy Speaker adjourned the meeting till April 16 but on April 6 it was learned from social media that the meeting was resumed on April 6. A no-certainty movement was recorded against the Deputy Speaker and a notice was given to disavow his powers.
On this occasion, the Chief Justice said that under the rules, as far as I can understand, the date of the election cannot be changed, can the election be postponed? On this, the counsel for the Secretary Punjab Assembly replied that the meeting could not be adjourned before 5 o’clock, and the proceedings of the Assembly could not be challenged under Article 69.
Here the Chief Justice remarked that time may go back and forth but not day, it cannot be when you want to follow the rules and when you don’t want to, tell me how long the voting can be? Elections have not been held for 10 days, you should hold elections in two or four days.
During the hearing, Hamza Shahbaz’s lawyer Azam Nazir Tarar said that if Hamza Shahbaz’s papers were accepted then the election should have been held on April 6. We want the matter to be resolved by sitting in the office of Advocate General Punjab.