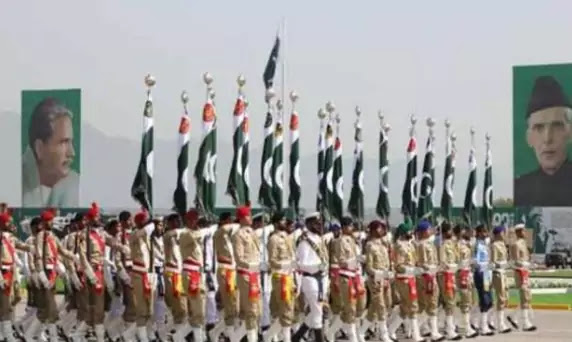 ISLAMABAD – The nation is celebrating Pakistan Day today with great enthusiasm. According to details, this day is a public holiday across the country. The day started with special prayers in mosques and Pakistan Army saluted with cannons.
Pakistan Arif Alvi, Prime Minister Imran Khan, Chairman Joint Chiefs of Staff General Nadeem Raza, Army Chief General Qamar Javed Bajwa, Naval Chief Admiral Ajmal Khan Niazi, and Air Vice-Marshal Zubair Hassan Khan are also present, besides OIC Foreign Ministers. Meeting participants have also been invited to the parade and the OIC float has been made exclusively part of the parade.
It has been reported that the theme of the main parade of Pakistan Day this year is ‘Shah Rahe Pakistan’ which was taken from the national anthem.
Troops from the Armed Corps, Artillery, Air Defense, and Rangers are also taking part in the parade, with state-of-the-art JT fighter jets flying past and aviation flypast.
It may be recalled that the day is commemorated on March 23, 1940, in memory of the resolution passed at the meeting of the All India Muslim League in the light of which the dream of a separate homeland for the Muslims of the subcontinent came true.
I was presented where the Minar Pakistan was built as a memorial to him while the Great Raqbal Park is located on the site of Manto Park today.