Skip to content
HomeLatest NewsThe love on social media took the young man from Bahawalpur to the desert of India
The girl said, “Come to Mumbai” and I crossed the fence and came here. Statement of Pakistani youth Ahmar during interrogation 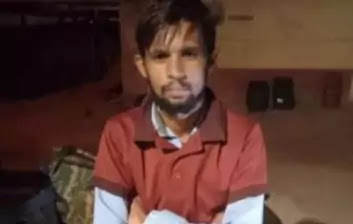 Bahawalpur – What does love not to do to a person, and if there are boundaries in love, then man has a passion to cross any border, such a passion is one of the Bahawalpur city of Pakistan He also rode on a young man who fell in love with a girl and reached the desert of India.
Muhammad Ahmar, a 21-year-old resident of Bahawalpur, Pakistan, crossed the India-Pakistan border illegally last month to visit his beloved in Mumbai, but instead of reaching his destination, he flew to India, according to the BBC.
Arrived in a desert district and is now being interrogated by a young Pakistani red man in the custody of Indian security forces. Indian officials say 500 rupees were recovered from Ahmar at the time of his arrest, but no weapons were found. However, security officials investigating Ahmar did find a story.
According to Indian officials investigating Ahmar, Muhammad Ahmar was in touch with a Mumbai resident through social media. According to a relative of Ahmar in Bahawalpur, Ahmar befriended an Indian girl on Facebook and he talked to her for hours.
I applied for a visa but it was denied, after which I decided to cross the border Ahmar told investigators. According to Sri Ganganagar Superintendent of Police Anand Sharma, the interrogation of Ahmar revealed that he was in touch with a girl in Mumbai through social media and fell in love with her.
Anand Sharma says that during the interrogation, Ahmar said that the girl told him to come to Mumbai and he crossed the fence and came there. They thought that after crossing the fence they would reach Mumbai as if Mumbai was on the other side of the fence.
SP Anand Sharma said, They crossed the fence and came to India when a BSF officer saw them and asked them to hand themselves over to the security forces, whereupon they handed themselves over to the officers.
Given SHO Phol Chand said that a joint investigation committee comprising representatives of various security agencies has been formed to interrogate the arrested boy and verify his claims.
The committee visited Mumbai to find out that the girl they were claiming to love was a real person, they were definitely in touch with him and their intention was not illegal.
Superintendent of Police Anand Sharma confirmed that the investigation team had also met the girl. We are almost certain that no anti-government activity is involved, but the central agencies are also investigating at their own level he said.
He said that when it was proved that he was completely innocent then BSF would have a flag meeting with Pakistan Rangers. If they (Pakistan) recognize him as their citizen and that he has crossed the fence, he will be returned Sharma said. Otherwise, we will inform the Pakistani embassy in New Delhi so that they can take up the matter themselves he said.
Sharma added that according to the girl, she was talking to Ahmar for fun. He jokingly said, “You come,” but never thought he would come. Ahmar’s cousin Arshad told journalist Mohammad Imran Bhindar that Ahmar’s father is ill in Pakistan and he has been bedridden for a long time while the eyes of the old mother are also waiting to see her son.
According to Ahmar’s cousins, Ahmar’s two brothers work hard in nearby areas. Ahmar’s cousin has confirmed the picture of Ahmar released on Indian media that the picture is of Ahmar. According to Indian media, Indian security officials have spoken to the young man’s mother and village number, but no formal action has yet been taken to secure his release.