The journey from Mehfil Milad to marriage Amir Liaqat gave details of his first meeting with Dania - 10bmnews Skip to content
The first meeting was for 28 minutes. When he went to Mehfil Milad in Lodhran, Pir Sahib told him to marry a girl whom he had not seen. Then Dania was met and got married. Aamir Liaqat’s talk in the program 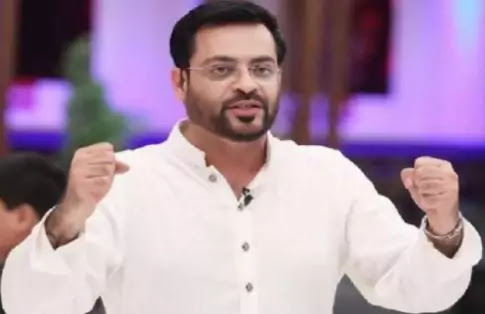 Lahore – Pakistan Tehreek-e-Insaf (PTI) MPA Amir Liaquat has made his first entry in the media with his newlywed bride Dania Shah. Aamir Liaquat Hussain told 92 News program ‘Sobh Sawyer Pakistan’ that his first meeting with Dania Shah was for 28 minutes, the two had never met before. Later the hosts took me to a Pir Sahib.
I talked to him about private matters and he told me to get married but he did not see anyone, so Dania Shah was called and they both got married. Agreed.
Aamir Liaquat further said regarding the first meeting with Dania Shah that she kept her eyes down in the first meeting, I found her very simple and lovely.
And when they started talking, I liked them very much. Aamir Liaquat further said that our marriage took place a week and a half ago in Lodhran. Dania Shah’s family was present in the marriage. He said that when she cried in her childhood, she would be silenced by showing ‘Alam Online’.
He said that Dania wanted us both to go for Hajj, but when I saw her face, I gave her a car. Aamir Liaquat said that he has just been able to go out in Karachi. He said that Imran Khan has not done it yet, maybe we can do the ceremony together.
But the problem will be that they will only give tea and biscuits. I would like to attend Bilal Bhutto’s funeral. I love Imran Khan very much and he knows this too. If Nawaz Sharif comes to Pakistan at my invitation. If they go, I will invite them to the funeral. If Nawaz Sharif comes, I will give them a look and greet at the funeral. He said that if Maulana Fazlur Rehman is invited to the wedding, all the food will be gone. Great job, Maryland cruiser to get ready for the wedding