Skip to content
HomeInternational NewsThe heads of state of Saudi Arabia and the United Arab Emirates refused to listen to US President Joe Biden
Spread the love
The White House has repeatedly tried to persuade Saudi and Emirati leaders to speak to President Biden, but both leaders have refused to accept the US president’s phone call. British Broadcasting Corporation Revealed 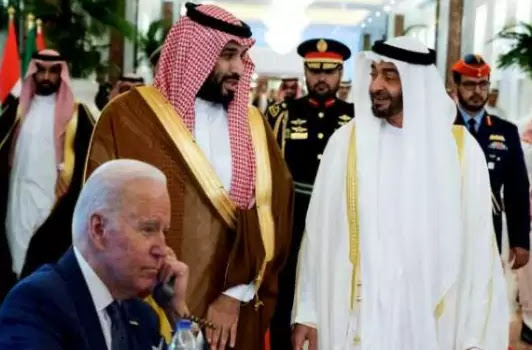 WASHINGTON – The distance between the Arab countries and the United States is widening, leading to fears of major developments in the region. UAE leaders have refused to speak to US President Joe Biden on the phone.
The British Broadcasting Corporation has revealed in its Arabic edition, quoting the prestigious US Wall Street Journal, that Crown Prince Mohammed bin Salman of Saudi Arabia and Sheikh Mohammed Zayed Al Nahyan of the United Arab Emirates have met with US President George W. Bush over the past few weeks. Biden has refused to speak on the phone.
The report says that the White House has repeatedly tried to persuade Saudi and Emirati leaders to speak to President Biden, but both leaders have refused to accept the US president’s phone call.
The United States has said it wants to control global oil prices in the wake of the Russian invasion of Ukraine and is seeking to increase global support for Ukraine. The Biden administration has formally banned Russian oil imports. It has been trying to increase oil supplies since the imposition, pushing oil prices to 130 a barrel, the highest level in 14 years.
However, the American magazine says that the situation is not as simple as it is trying to present it. The inclusion of the UAE name in the ATF’s gray list is aimed at blackmailing and increasing pressure, which is not acceptable to the state.
In a recent interview, Saudi Arabia’s Crown Prince Mohammed bin Salman said he did not care what US President Joe Biden thought of him but insisted he was with Washington.
Riyadh aims to maintain strong ties. “Saudi Arabia has to maintain and strengthen its relationship with the United States because we have a long and historic relationship with it he said. Relations between the two countries had soured.
The US president had ended support for the Arab League’s military operations against the Houthi militia in Yemen and removed Iranian-backed Houthis from the terrorist blacklist. Riyadh and the United Arab Emirates provided weapons. Had frozen sales and vowed to reshape relations with Saudi Arabia.
Asked about the strained relations between Saudi Arabia and the United States, the Crown Prince said: I do not care what the White House thinks. It is up to President Biden to consider US interests in Saudi Arabia.” He asserted that his confession had been obtained through torture and that his confession had been obtained through torture.