Skip to content
HomeLatest NewsThe hand that is on Imran Khan’s head can be on the neck of the opposition and not on the head
Spread the love
Opposition is blind whale fish, Imran Khan’s government will complete 5 years. Federal Interior Minister Sheikh Rashid talks to the media 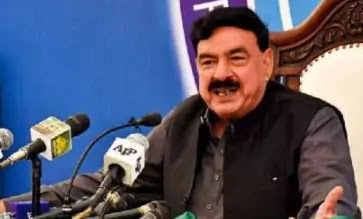 ISLAMABAD – Federal Interior Minister Sheikh Rashid has said that the hand which is on the head of Imran Khan may come on the neck of the opposition and not on the head, the opposition is blind whale fish, Imran Khan’s government 5 Will complete the year.
Talking to the media, he said that no one likes to go to IMF, happily, no one goes to IMF, yesterday he went to IMF for the 23rd time, Prime Minister Imran Khan is going to China next month. Under the Ehsas program, Rs. 180 billion was distributed among 15 million people.
He said that whether Nawaz Sharif wants to come or not, all four Sharifs are minus from Pakistan’s politics, Shahbaz Sharif is more corrupt than Nawaz Sharif.
He said that in governmental issues, I generally battle with kinship from number one and from number one. Federal Interior Minister Sheikh Rashid said that the opposition is blind whales, they want the hand that has been placed on Imran Khan’s head to be placed on his head, that hand will come on his neck but on his head. Will not come, Imran Khan’s government will complete 5 years.
He said that now the rupee will strengthen against the dollar, work is going to start on the promises made to the people of their area, people want to see these thieves in jails, IMF is compelled.
There was no other way, we got the economic problem of the country dowry, Interior Minister Sheikh Rashid said that the Murree incident is a provincial issue, I went there on humanitarian grounds, I do not want to talk about the provincial issue. He said that it was good news for the people of Rawalpindi that the project for drainage has been approved