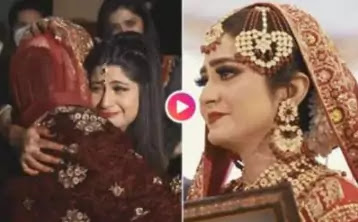 Makana – Almost every bride wants her parents, sister, brother to be with her on the occasion of marriage, various entertainment to commemorate these happy moments. Activities were also held.
In a wedding held in Pakistan, the bride made such an entry that the guests present at the wedding ceremony could not control their emotions.
To make the wedding memorable, videos of various entertainment activities are made and uploaded on social media. In these videos, sometimes the bride is angry and sometimes the groom’s wishes are seen to be shattered. The audience and the guests at the event were overwhelmed.
A photographer named Maha shared a 57-second video of a Pakistani bride from her account in which she is entering the hall with her father but her mother is not with her as she has passed away.
Every eye got wet when he saw the bride entering the hall with the picture of her mother. When it was shared on social media, the eyes of the users also became watery. While sharing the video, Maha wrote:
Not with them, like my mother ‘. In the background of this video of the share, the famous song of Indian singer Arjit Singh about mother can also be heard, the video has been watched by more than 3.6 million people so far while hundreds of users. One user said I got tears in my eyes after watching this video
Read more: Sheikh Rashid and my relationship is 6 years old yes I still want Imran Khan