Skip to content
Home Latest News The government reacted to the press conference of Chairman PTI Imran Khan
Imran Khan’s entire politics is based on lies. He has been making allegations of corruption and money laundering for 4 years but nothing has been proved. Today again he is making allegations that are rotten. Information Minister Maryam Aurangzeb’s Press Conference 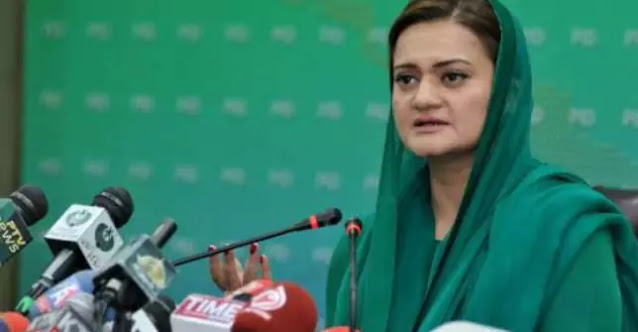 ISLAMABAD – The government has responded to the press conference of PTI chairman Imran Khan. According to details, while giving a press conference in Islamabad, Federal Minister for Information Maryam Aurangzeb said that it is our responsibility, to tell the truth to the people of Pakistan.
In 4 years the people were brutally robbed, for 4 years there were allegations of corruption and money laundering, and nothing was proved.
He said that Imran Khan’s entire politics is based on lies, he used all the institutions against the opposition and sent all the records to the NCA but not a single instance of corruption was proved. Taken out, they accused others of corruption but could not prove anything.
Maryam Aurangzeb said that you are the only prime minister who sold gifts of Tosha Khana, today in Pakistan due to inflation and unemployment is due to Imran Khan, it has been only two and a half weeks since he left the government The screams have already started coming out.
Remember that Pakistan Tehreek-e-Insaf (PTI) chairman Imran Khan had said that Shahbaz Sharif kept a record of all the cases, it is feared that this record will be lost, many of his properties have not come to light yet, they should return to the country.
Will go and send money abroad, Musharraf harmed the country by giving NRO, we did not file any corruption cases against him during our tenure, FIA registered a case against Shahbaz Sharif And PPP governments have been ousted two or three times for corruption, so it should be known how much damage was done to the country by Musharraf’s NRO.
The previous state leader said that the nation was in deficiency as a result of his plundering. When asked, he said that we are not residents of Pakistan the child of a three-time Prime Minister of the nation says we are not Pakistanis.
He said that separated from the disclosures in the Panama Papers, there are likewise covered up properties, there are 16 instances of 40 to 45 billion which have been chosen, this is the family that has gotten back to the country for a very long time, in FIA of 16 billion rupees.
There are cases, they took money in the names of their servants, and sent billions of rupees abroad in the name of Maqsood Chapdasi, the officers of this case have been transferred, and the prosecutor has been barred from going to court.
Chairman PTI said that money was stolen from hereunder fake names and sent abroad. The Prime Minister is on bail. Son of the Chief Minister, he is also on bail. Presently, NAB was an autonomous body. These cases were going on there.
He said that in his time 15% used to go to Tosha Khana, Asif Zardari took out three bulletproof vehicles from Tosha Khana, Nawaz Sharif legalized one car after ten years, in our time 50 percent used to go to Tosha Khana.