Skip to content
HomeBreaking newsThe federal cabinet approved the threatening letter to be shared with important personalities
Spread the love
The letter will be shown to the Chief Justice of Pakistan, Chairman Senate, and Speaker of National Assembly Asad Qaiser 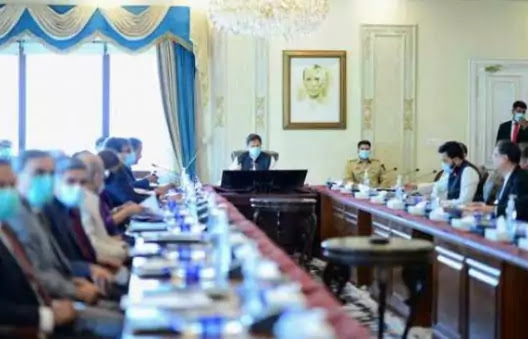 ISLAMABAD – The federal cabinet has approved the sharing of threatening letters with important personalities. According to details, an emergency meeting of the federal cabinet chaired by Prime Minister Imran Khan ended.
According to media reports, during the meeting, the federal cabinet approved sharing the threatening letter with important personalities. After the approval of the Federal Cabinet, the threatening letter will be shown to the Chief Justice of Pakistan, Chairman Senate, and Speaker of National Assembly Asad Qaiser.
Federal Minister for Religious Affairs Pir Noor-ul-Haq Qadri while talking to private TV channel Samaa News confirmed the decision of the federal cabinet. On the other hand, according to Geo News, in case of no vote on the no-confidence motion on April 9, the Supreme Court has been ordered to open at 12 o’clock at night.
It has been informed that the doors of the Supreme Court should be opened at 12 o’clock at night. The Supreme Court may hold a session to implement its decision. Similarly, Chief Justice Islamabad High Court has also ordered to open the doors at 10 o’clock. Instructed all staff to arrive.
The National Assembly Secretariat has also persuaded Speaker Asad Qaiser to vote on the no-confidence motion, on which the Speaker has directed the staff of the National Assembly Secretariat to remain alert. The no-confidence motion and legal options were considered.
On the other hand, Pakistan Tehreek-e-Insaf (PTI) has filed a petition for review of the decision of a five-member bench of the Supreme Court dated April 7, 2022. The petition was filed by PTI Secretary General Asad Umar. Has been requested.
The text of the petition states that the Supreme Court cannot give a timetable to the National Assembly under Article 69. No confidence or election of the Prime Minister is written in detail in the 1973 Constitution. Yes, the Supreme Court does not have the power to micro-manage the decisions of Parliament. The court is asked to withdraw the April 7 order of the five-member bench