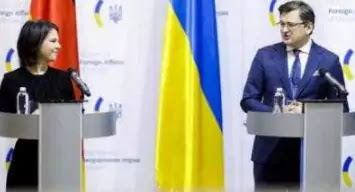 Islamabad – During her first visit to Ukraine as German Foreign Minister, Anna Lena Berbuk said she wants a peaceful diplomatic solution to the ongoing conflict between Ukraine and Russia. She is visiting on Monday at a time when fears are running high that Russia is planning a new offensive in eastern Ukraine.
Russia however, has denied the allegations in a statement issued Friday stating Similar baseless allegations concerning Russia’s intelligence have been made more than once.
Speaking at a press conference after meeting with her Ukrainian counterpart Dmitry Koliba in the Ukrainian capital Kyiv, Anna Lena Berbuk said the German government would use all available resources for the security of Ukraine and Europe. The only solution is diplomacy
The German Foreign Minister added that he expects the crisis to be resolved at the diplomatic level.
At the same time, however, he warned Russia that if the Moscow government launched a new attack on Ukraine, Russia would face consequences. Burbank said Russia would have to pay a heavy price economically, politically, and strategically for any further aggression. He stressed that diplomacy was the only solution to the conflict.
During her stay in Kyiv, Anna Lena will leave for Russia after meeting with observers from the Organization for Security and Cooperation in Europe (OSCE) and the Ukrainian president. She says she wants to know the perspectives of the parties so that strategies can be worked out to resolve the issue.
The German foreign minister will also meet his Russian counterpart Sergei Lavrov in Moscow on Tuesday, the second day of his visit.
The crisis was getting worse
Russia has deployed heavy troops on its borders with eastern Ukraine, which has caused tensions in the region. Talks between the Kremlin and Washington in Geneva last week to end the tensions ended inconclusively.
A cyberattack on Ukraine has further heated up the situation. Last week, intelligence reports surfaced that the Russian military was using the pro-Russian rebel-held Ukrainian territories as a pretext for sabotage.
However, Russian Foreign Minister Sergei Lavrov has said that Russia has no intention of invading Ukraine. The Moscow government has accused the Western defense alliance, NATO, of seeking to increase its military presence on Europe’s eastern borders as an excuse.
Speaking to reporters in Moscow on Monday, Lavrov reiterated that he wanted a written guarantee from NATO that it would not deploy troops or military equipment in Ukraine or any other former Soviet state. The Western defense alliance has rejected the Kremlin’s request