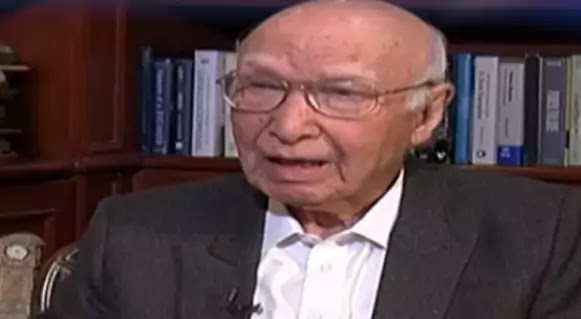 ISLAMABAD – Pakistan Muslim League-Nawaz (PML-N) central leader Senator Sartaj Aziz has said that the army is the reality of this country and Nawaz Sharif is aware of it. They want to do it but they do not want the army to make its superiority in politics in return.
Speaking on a private TV program, former foreign adviser Sartaj Aziz admitted that Nawaz Sharif came into politics through the Establishment but soon changed his mind, 90 Governor Jilani had brought him as Finance Minister and then he became the Chief Minister of Punjab, the first time I felt that ten days had passed when our government was formed in the ’90s and Ishaq Khan was not calling him, he had come to my house on his way from Murree to Lahore and he told me that Ishaq Ask Khan to let voters decide who will have the government. In the ’90s, Nawaz Sharif had decided to fight for civil supremacy because without civil supremacy the system could not function.
The former foreign adviser said that for ideal democracy and civilian supremacy we have to make sacrifices and make tough decisions. Whenever we deviate from democratic principles the country has suffered.
The tragedy of East Pakistan was The biggest reason for not establishing our democratic system was when Pakistan was formed. I think that constitution-making in 1955 was first delayed.
India had made its constitution in 1950 and we could not make our own constitution till 1956. In response to a question, Sartaj Aziz said that the main reason for the tension in civil-military relations in the last period of PML-N was that the misunderstanding and mistrust continued.
Our democratic system has deteriorated not only because of the military role but also because of our own behavior because the political system is still underdeveloped and there are many contradictions due to linguistic and religious differences he said. After all, our center is still active. There is only a lack of resources and the cure is to increase the resources.
In our time, taxes were 12/13% which is now 10%. Political instability is the biggest cause of economic turmoil. Since then the democratic process has been restored but which government has completed its term? The party did not have a leader.
Read more: Police arrested the accused in the incident