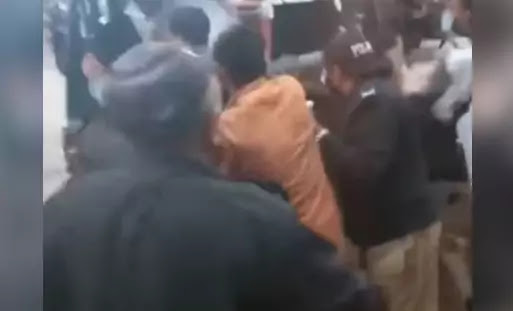 Karachi – Significant progress has been made in the investigation into the murder case of Muttahida Qaumi Movement (MQM) Pakistan official Aslam, who was allegedly killed by police in front of the Chief Minister’s House. Call record data of mobile phone has been retrieved.
According to private TV, point scoring is going on at the protest of MQM at the Chief Minister’s House while the Prime Minister has also taken notice of the violence against MQM workers and the death of a worker named Aslam. On the same issue, the investigating authorities have obtained the data of Aslam’s entire day yesterday.
With the help of call record data, the location of the deceased worker has been traced. According to investigators, Aslam was at his home at 1:42 a.m. yesterday. Aslam Shara Faisal arrived at the protest at 5:10 a.m. It lasted for 54 minutes.
According to the investigating officers, the police action started at 6.30 am when Aslam was at the press club. According to the authorities, Aslam was brought to the hospital at 8:30 pm, died at 10:29 pm, came to the mobile location at 10:33 pm when the deceased was taken home.
On the other hand, the funeral prayer of MQM Pakistan worker Muhammad Aslam has been offered.