Skip to content
HomeLatest NewsThe 22-year-old girl married a disabled young man out of love
Spread the love
After Raees’ illness, my family members did not agree to marry me but I did not want to leave and I married her in 2017. I pray that Raees will get back on his feet again. 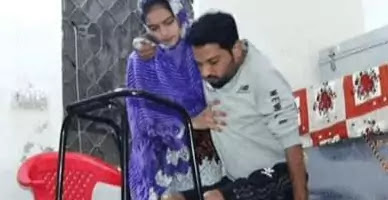 Burewala – a 22-year-old girl married a disabled young man for love. According to Express-News, Saima belongs to the Burewala area of ​​Punjab. He had a marriage of choice and now they have a two-year-old daughter.
Raees fell out of bed due to illness and lost his job in this situation. His family did not agree to the marriage but Saima did not leave her love alone in this difficult time and decided to stay with him. And married Raees of choice. The two are now living in a small rented house in the Walton area of ​​Lahore.
Saima Raees, who is supporting her husband, hopes that her husband will one day be able to stand on his own two feet again. According to Saima, the engagement took place two years ago. She says that I lived in Burewala and Raees was in Karachi. We kept in touch on our phones.
And the brothers wanted to end our relationship but did not want to leave Raees and married him in 2017 and now we have a daughter.
Saima says that it has been only a few months since we moved to a new house, so the work of sewing and beautification is not much.
A brother of Raees who lives in Karachi is helping him. Some people help a little by watching videos but we did not give up. I serve my husband day and night and I hope that one day my family will be kind and Raees will stand on his feet again.