Skip to content
HomeLatest NewsTell Saqib Nisar who forced me and Nawaz Sharif to punish
Saqib Nisar’s sins should not be borne by the judiciary, the judiciary should separate itself from this issue, PML-N Vice President Maryam Nawaz termed the leaked audio of former Chief Justice as a charge sheet against Saqib Nisar 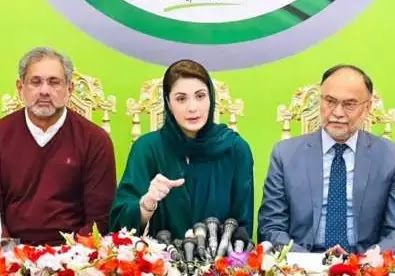 ISLAMABAD – Pakistan Muslim League-Nawaz (PML-N) leader Maryam Nawaz has termed the leaked audio of former Chief Justice as a charge sheet against Saqib Nisar. She held a press conference with party leaders in Islamabad. He said that earlier Saqib Nisar had said that this voice is not his. Saqib Nisar will have to tell the truth tomorrow if not till today.
The system of nature has come into action against their conspiracy. Maryam Nawaz said that tell Saqib Nisar who told her to bring Imran Khan. Tell her who forced you to punish Nawaz Sharif and me. Tell Saqib Nisar why you were forced to take illegal steps. And who was he that you as Chief Justice could not deny? He said that this is the fifth testimony in favor of Nawaz Sharif and PML-N.
Imran Khan was asked to bring a petition against Nawaz Sharif to us. The names of 450 people in Panama were mentioned. No one was told anything and his name was not mentioned. Maryam Nawaz said that the first witness was Justice Shaukat Siddiqui. She made serious allegations and said that DG ISI came to her house and asked to punish Nawaz Sharif.
In three years, General Faiz never denied this. Judge Arshad Malik was likewise removed for talking reality. Maryam Nawaz added that more than 400 names were mentioned in Panama. But none other than Nawaz Sharif Saqib Nisar will have to answer. He will have to tell the truth to the nation. The legal executive ought not to bear the weight of Saqib Nisar’s transgressions. Let me give justice to Nawaz Sharif and wash this stain off my face