Skip to content
HomeLatest NewsTehreek-e-Lubaik Pakistan announces return to Lahore after ending sit-in in Wazirabad
Spread the love
Tehreek-e-Labeek-e-Pakistan (TLP) has shifted Wazirabad sit-in back to Masjid-e-Rehmat-ul-Ulameen after the completion of a 50% agreement. 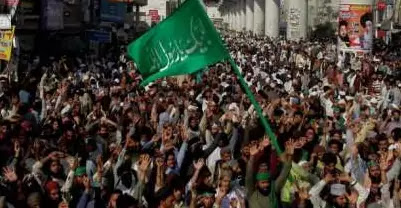 Lahore – Tehreek-e-Lubaik Pakistan (TLP) announced to end the ongoing sit-in in Wazirabad and return to Rehmat-ul-Alamin Mosque after the government lifted the ban. have done. A statement issued by the TLP spokesperson said that in accordance with the agreement, our elders like Mufti Muneeb-ur-Rehman have given a guarantee, on which we will now go to Rehmat-ul-Alamin Mosque. The Wazirabad sit-in has moved back to the Rehmat-ul-Alamin Mosque.
He said that TLP is abiding by its agreement and now the Urs ‘Amir-ul-Mujahideen’ will be prepared, which will be held from November 19 to 21 at TLP Mosque Rehmat-ul-Alamein. Saad Hussain Rizvi will be with us. Referring to the release of Saad Rizvi, he said that Allama Saad Hussain Rizvi has said keep me in prison for life but solve the problem of France. Work has begun on setting up a committee for eviction and we have all the evidence.
He said that now the government should also complete the agreement reached on Tehreek-e-Libek’s blood within the stipulated time. Was released. The notification issued by the Interior Ministry said that the federal government had removed Tehreek-e-Libek Pakistan from the First Schedule of the Anti-Terrorism Act 1997 as a banned party under sub-section one of the Act.
Earlier, a notification issued by the Cabinet Division said that the Cabinet reviewed the summary submitted by the Home Division on November 6, 2021, which was issued under Rule 17 One B and 19 One of the Rules of Business, Tehreek-e-Lubaik Pakistan (TL). P) was sent to remove the ban. The notification said that the cabinet has approved the proposal given in paragraph 8 of the summary. Prime Minister Imran Khan had approved to present the summary in the cabinet to lift the ban on TLP. The TLP was banned under anti-terrorism law in April after three days of violent protests across the country.
A summary sent to the Prime Minister by the Federal Ministry of Home Affairs said that the TLP had requested the Punjab government to lift the ban on April 29. Mufti Muneeb, a key member of the negotiating team between the government and the TLP, In a statement after the TLP called off the sit-in, Rehman said that the Majlis-e-Shura of Tehreek-e-Lubaik Pakistan had finally ended its peaceful sit-in at Chatha Park Wazirabad on the orders of its leadership. In the air, the comprehensive mosque Rehmat-ul-Ulameen flew towards Lahore.
He said that it was known to all that the people of religion are bound by their word and those who were suffering from anxiety and worry, now they should be sure that this statement has come true. The results will be positive for the country and the nation will be a source of advice and welfare. Mufti Muneeb-ur-Rehman said that all the issues related to the agreement which are yet to be implemented or are in the process of implementation will be completed amicably.