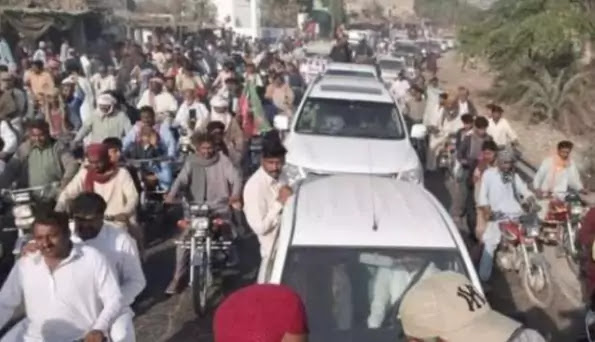 Karachi – PTI’s rights in Sindh became a nightmare in March, several PTI leaders and workers were looted, the pockets of media representatives were also wiped out. According to the details, pickpockets became active in the PTI Sindh rights march, several leaders and activists who participated in the march were looted, even those associated with the media were not spared.
Mobile phones of Khalid Baloch and Rehmat of Security Squad were stolen, mobile phones of media representatives were also taken out of their pockets, wallets of several persons were also stolen. Public representatives, PTI Security Squad, and media Representatives’ pockets were wiped out, Rs 35,000 was taken out of MPA Raja Azhar’s pocket.
The incidents of pocket killings took place in Kamo Shaheed, Sukkur, and Shikarpur. PTI leaders have issued instructions that everyone should take care of their pockets in crowded places.
On the other hand, Pakistan Tehreek-e-Insaf (PTI) leader and Foreign Minister Shah Mehmood Qureshi have claimed that PPP paid Rs. 30,000 to attract people in the long march. According to details, while addressing the participants of Sindh Rights March in Shikarpur, he said that the Zardari gang has robbed the people of Sindh for their own interests. I have heard that Bilawal Bhutto is leaving for Punjab today. They are coming to Islamabad to ask for an account of the year and we are bound to give an account. We have a clean slate and we are not afraid to give an account.
It may be recalled that PPP launched a long march against the government. Bilawal Bhutto Zardari addressed the workers at Mazar-e-Quaid. Chairman PPP Bilawal Bhutto Zardari said that enough is enough, after three years of watching, now the selected one has to go home, Imran Khan robbed the people of their votes and stomachs It’s time to go home