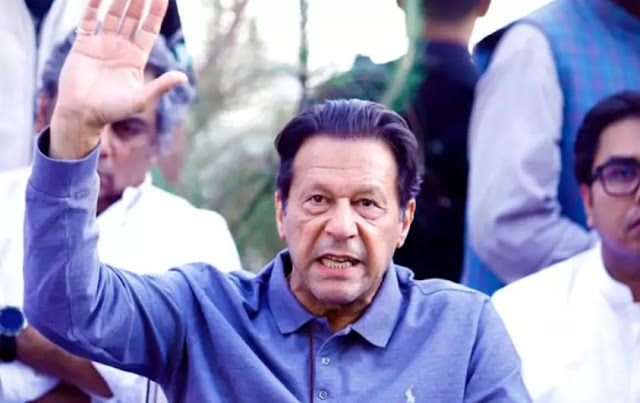 Former Prime Minister Imran Khan on Saturday once again referred to the “foreign conspiracy” to overthrow his government through a no-confidence motion and demanded an open hearing from the Supreme Court.
During a press conference in Bani Gala for the first time since losing the PM’s job, Imran Khan said that the game against him had started in January.
The next day, a no-confidence motion was filed by US official Donald Lou with the Pakistani ambassador.
Referring to the meeting of the National Security Committee convened on the issue of the letter, he said: The National Security Conference has confirmed that the minutes of the meeting chaired by me were correct.
It may be recalled that the National Security Committee had said in a statement yesterday that “there was no foreign conspiracy involved.
Continuing his speech, the former Prime Minister further said that due to which the rolling of Deputy Speaker Qasim Suri was not accepted, the Supreme Court should do it now.
I want an open hearing inside the Supreme Court. Not these cameras, I’m asking for an open hearing because it’s such a big deal. Imran Khan added: If our Supreme Court does not stand up for its integrity today, no Prime Minister will tolerate threats but will raise his hand to save his seat.
At the same time, he said, the Supreme Court should investigate “who started going to embassies abroad” before the no-confidence motion against him.
According to Imran Khan, this conspiracy is a serious threat to Pakistani democracy and if our institutions do not stop it, the future of our children will be in jeopardy. He also demanded that the Election Commission resign as he did not trust it.
He once again instructed his workers to prepare for the march toward Islamabad
He said he would announce the date of his arrival in Islamabad later but at the same time directed the party leaders to prepare for the march for “true freedom”.
Shortly after Imran Khan’s press conference, Information and Broadcasting Minister Maryam Aurangzeb told the media that Imran Khan was spreading false propaganda of conspiracy.
He asked why Imran Khan hid the post. He said that Imran Khan should stop fooling the people.
Maryam Aurangzeb asked why the Election Commission should resign so that the foreign funding case against Imran Khan would end.
He further said that holding sit-in is written in the destiny of Imran Khan. When you come to Islamabad, you will be asked about the money in the closet. You will be asked where the watches received as gifts went. He made the country indebted to the tune of Rs 45,000 billion. Robbed the treasury
Read more: There was Husain Fram Shah Mehmood Qureshi and Prime Minister Imran Khan