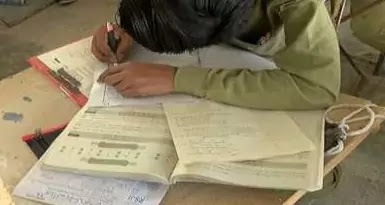 Kaminski – A student who gave papers in place of the son of PML-N MNA was arrested. According to details, the youth was caught handing over papers in place of the son of PML-N National Assembly member Chaudhry Zulfiqar Bhandar. A young man named Khatib was handing over papers in place of Farman, son of National Assembly member Chaudhry Zulfiqar Bhandar from Kaminski.
The incident took place at Government High School. Police have enrolled a case and started the lawful activity. However, the son of the National Assembly member is still absconding. League MNA Zulfiqar Bhandar’s son Farhan’s matriculation was a general science paper whose center was made Government High School number Kamonki – arrested accused The agreement was reached.
Police are investigating further. On the other hand, during the matriculation examinations in Sindh province, section 144 was enforced on serious violations of the examination code of conduct, including cheating, but despite this, reports of cheating and pamphlets continued to circulate. Section 144 was implemented in examination centers and board offices across the province to ensure transparent examinations.
According to a statement issued by the Sindh Home Department, unauthorized persons who have been banned from entering the examination centers while carrying mobile phones in the examination centers will also be banned. The statement also directed the police to take disciplinary action in case of violation of the said instructions.
On the other hand, despite the implementation of section 144, like the tenth class, the first paper of the ninth class also got out before the examination started. It was out 15 minutes ago. Despite the implementation of section 144, the out-of-date papers were being sold around the examination centers and the administration seemed to be completely ineffective in this regard.