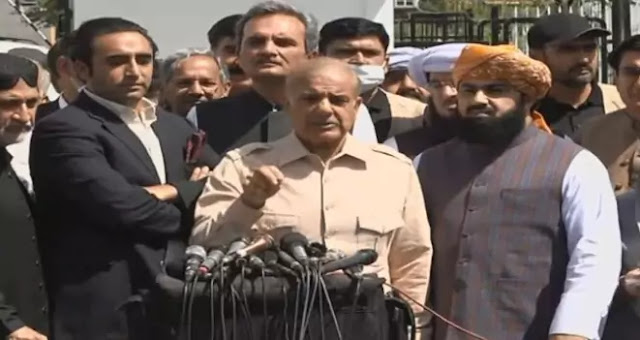 Opposition leaders reacted angrily to the adjournment of the National Assembly, which was soon to begin under the chairmanship of Asad Qaiser. TI workers trampled the law under their feet.
Speaker and Imran committed treason: Shahbaz Sharif
Addressing a joint press conference of the opposition leaders in the National Assembly, the Leader of the Opposition in the National Assembly, President PML-N Mian Shahbaz Sharif said that they conspired with Speaker Imran Niazi and committed treason under Article 6.
He further said that I stood up to speak on the point of order but the speaker did not even look at me, this role of the speaker will be remembered in the dark history.
Shahbaz Sharif says that the speaker did not give me a chance to speak, he should have taken up this resolution, on Monday the speaker acted unconstitutionally and parliamentary then we will use every constitutional, legal and political tactic.
He said that if they commit fraud on Monday then Qalandar will be in trouble.
The next prime minister will be elected: Bilawal
Talking to the media, Chairman PPP Bilawal Bhutto Zardari said that he does not believe in being elected, the next Prime Minister will be elected inshallah.
He said that the Prime Minister and the Speaker were themselves undemocratic and the opposition would unite and fight undemocratic forces against democracy.
Bilawal Bhutto Zardari said that Prime Minister Imran Khan is running away from the competition, how are these captains who are running away from the pitch.
He said that when PPP leader Fauzia Wahab passed away in June 2012, we offered Fateha but also fulfilled our constitutional responsibility.
Chairman PPP said that in June 2012 we held a session in accordance with democracy, they are using every means to escape, the Prime Minister has lost confidence.
They say that the opposition parties are united and we will not allow them to flee. InshaAllah there will be competition, Imran Khan’s government is over
Bilawal Bhutto Zardari said that he would take revenge through a democracy by exercising the right of no-confidence.
The role of the Speaker is that of a servant of the Prime Minister, Maulana Asad
Maulana Asad Mahmood, Parliamentary Leader of Jamiat Ulema-e-Islami Pakistan (JUI-F), while talking to the media, said that what the Speaker said was as a personal servant of Imran Khan. Of
He said that the speaker has given practical proof of his impartiality, his role in the history of the country will be written in black, even after the attack on Sindh House, the speaker did not contact anyone, will show full force inside and outside the parliament.
The government is confused: Akhtar Mengal
Balochistan National Party (BNP) chief Akhtar Mengal told the media that the government has been confused since the no-confidence motion was tabled.
He said that what happened in the assembly is in front of everyone. If the government had a majority, it would not have resorted to these clever tactics but would have proved that the no-confidence motion of the opposition has been successful. I congratulate the opposition.
Akhtar Mengal said that if the government had members today, they would have presented them in the assembly today. We have traditions but the observance of the constitution is also important.
Sending Speaker home in a democratic way: Amir Hoti
Talking to the media, Awami National Party (ANP) National Assembly member Amir Haider Khan Hoti said that the Speaker should be thankful, they came from selection and we are sending them home in a democratic manner.
He said that it would be better to call Asad Qaiser PTI Chief Whip, the less condemnable his behavior would be.
Ameer Haider Hoti also says that the issues which should have been resolved in the parliament are trying to get sympathy by taking Imran Khan to the meetings.
How long will it take away its power? Mohsin Dawar
National Democratic Movement (NDM) chief Mohsin Dawar while addressing the media said that the speakers do not care about the constitution, they are taking care of the traditions, how long will they retain their power?
They also say that this is not democracy at all, everyone has a responsibility to know how to restore democracy after the no-confidence motion.