Skip to content
HomeLatest NewsSikh community offers Friday prayers at Gurdwara
Spread the love
President of Sardar Bazar Gurdwara Sher Dil Singh Sindhu says that this Gurdwara is open to people belonging to all religions without any discrimination and there is no politics in it. 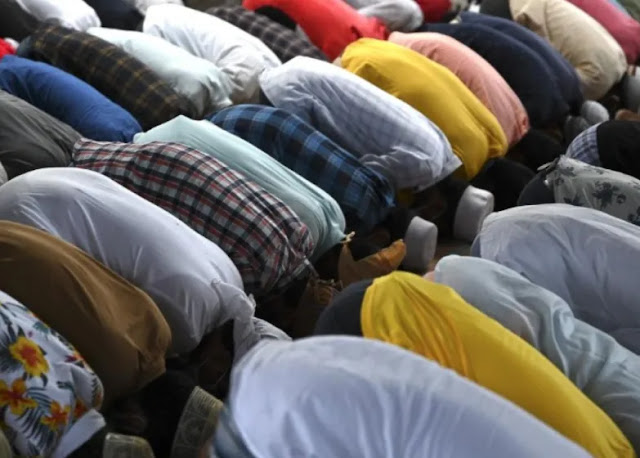 The management of Sardar Bazar Gurdwara in Gurugram, a suburb of the Indian capital Delhi, has offered the Muslim population to offer prayers at their gurdwara if they wish.
President of Sardar Bazar Gurdwara Sher Dil Singh Sindhu says that this Gurdwara is open to people belonging to all religions without any discrimination and there is no politics in it. He said that the basement of the Gurdwara is open for Muslim brothers who can offer Friday prayers there.
If there is an open space, Muslims should be allowed to offer prayers and we should not fight over such trivial matters says Sher Dil Singh Sindhu.

It’s ‘Guru Ghar’, open for all communities with no discrimination. There shouldn’t be any politics here. Basement is now open for Muslim brothers who want to offer ‘Jumme ki namaz’: Sherdil Singh Sidhu Gurudwara president pic.twitter.com/6gNW3eSuAz

People who want to pray in the open should get permission from the administration and those who have problems with this should contact the administration before attacking.
In India, activists from right-wing conservative parties are protesting against Friday prayers in open Muslim spaces.
How did this conflict start?
It should be noted that there was a systematic campaign on social media in India that Muslims pray on Fridays in the street or any other open space by spreading mats which disturbs the rest of the citizens so this series should be stopped.
On September 29, a video of a man protesting against a Friday prayer gathering in a town called Gurgaon near Delhi went viral. For six consecutive weeks since then, Hindu organizations have been disrupting Friday prayers. On November 5, Hindus worshiped at the same place as part of a Hindu festival.
Tensions escalated when these organizations invited the ruling BJP leader Kapil Mishra to attend the puja.

#Gurgaon’s Sadar Bazaar Gurudwara is now open for our Muslim brothers to offer their daily namaz keeping in mind the recent events that took place in the city.

The place where Muslims were barred from offering prayers was later celebrated on November 5 with the ‘Govardhan Puja’ festival, which was also attended by BJP’s Nita Kapil Mishra. These are the same Kapil Mishra who openly threatened the citizens protesting peacefully against the Civil Amendment Bill in 2019. A few days later, Hindu-Muslim riots broke out in northeast Delhi.
It may be said that it was run by extremist groups like Bharat Mata Vahini and Sanyukta Hindu Sangharsh Asmita, but it became clear when Home Minister Amit Shah also spoke out against it.
Addressing a rally in Uttarakhand on October 30, the Home Minister had said, “When I was coming, I was told that you do not know that the road will be closed today. I said why? They said that it is Friday and Muslims will offer prayers.
He also accused Congress of doing nothing but rewarding Muslims and it was Congress that allowed prayers in the streets and open spaces.
Amit Shah accused Congress that this allegation was not true because he had not done much for Muslims during his long tenure in power. This is not only the opinion of Muslims but also the statistics of the government itself
Earlier in 2018, the issue of prayers was also a topic of discussion, but at that time the issue was raised in Noida, a city at the confluence of Delhi and UP, not in the program.
In Noida, Muslims working in institutions used to pray in parks during breaks. UP is ruled by Yogi Adityanath, a BJP politician considered anti-Muslim. In 2018, Uttar Pradesh Police sent a message to the UP government to all private companies in Noida that no employee will pray in the parks.
Both Noida and Gurgaon are characterized by the fact that most of the private companies’ offices outside Delhi are located in these cities. Companies outside Delhi also open their offices here because on the one hand they are closer to Delhi and the Delhi Metro runs to these two cities and on the other hand people from outside Delhi can easily come here for employment.
At the annual gathering of the Tablighi Jamaat, which was already scheduled at their center Nizamuddin, some outsiders were trapped as soon as Karuna arrived, after which a conspiracy was reported in the media. The Nizamuddin Center had been closed for more than a year, after which conditional permission to offer prayers at the Center was granted in April this year on the orders of the Delhi High Court.
The dual policy of the government can be gauged from the fact that on the one hand the center was locked under the pretext of Karuna but on the other hand the world’s largest festival ‘Kumbh Mela’ was held in Allahabad which is now called Prayag Raj. In which millions of visitors take part.
Last month, mosques and Muslim properties were damaged in the northeastern state of Tripura, and videos of the violence went viral. The mainstream media made Sunni unheard. Tripura also has a Bharatiya Janata Party government. Earlier this year, an attempt was made to tighten the noose against Muslims through a Governor’s Ordinance in Podochari.
Pakistan’s position
Pakistan’s foreign office has reacted to the ban on Muslim worship in India.
A statement issued by the Pakistani office said, “Pakistan has a lot to do with attacks and vandalism of fanatical Hindu mosques in the Indian states of Uttar Pradesh and Haryana, which are ruled by the Bharatiya Janata Party (BJP). Is worried
Despite international concerns, attacks on Muslims, their places of worship, homes, and businesses continue in India,” the statement said.