Skip to content
HomeLatest NewsSialkot incident; Further revelations were made by the police
Spread the love
The mob that attacked Priyantha Kumara had petrol bottles. When the police arrived, the mob was also beating the factory owner. The accused had planned to set the factory on fire. Was threatened. Police officers 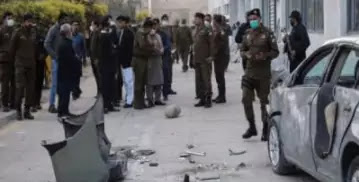 Sialkot – Further revelations came to light by the police regarding the Sialkot incident. According to media reports, in further investigations into the murder case of Priyantha Kumara, the Sri Lankan manager of a factory in Sialkot, police said that the mob that attacked Priyantha Kumara had petrol bottles.
After killing the factory manager, the accused also damaged his vehicle. In addition, the accused had planned to set fire to the factory and when the police personnel entered the factory, the mob attacked the factory owner Shahbaz Bhatti.
Meanwhile, during this time the crowd threatened to fire petrol and threatened to fire, 13 main suspects arrested in the incident of Sri Lankan citizen’s murder, have been handed over to police on a fast travel remand. The accused will be produced in Gujranwala Anti-Terrorism Court tomorrow.
On the other hand, the police arrested 6 more main accused involved in the Sialkot incident, bringing the number of arrests to 124, a police spokesman said. 6 main suspects have been arrested, for which the investigation was carried out in a scientific manner. In the last 12 hours, the police have identified 6 more main characters from CCTC footage and mobile calls data and arrested them. Hiding in the homes of friends and relatives for fear of arrest.
Earlier, Inspector General of Punjab Rao Sardar said that police negligence was not proved in the Sialkot incident, arrests would be made in the light of 160 footage.
Police arrived at the scene at 11:28 a.m. Upon receiving the report of the incident, the local police immediately informed the authorities, DPO and SP arrived on foot, the road was blocked after the incident. No negligence has been proved. If there is any negligence on the part of the police in the incident, we will look into it.
He said that among the 13 main accused, there are those who have been giving affidavits to the media in interviews. In the incident, not all the accused are murderers, but the role of each accused will be decided and the role of each accused will be decided in the investigation. 10 teams have also been formed for further arrests, the incident case includes terrorism provisions, RPO and DPO are monitoring the raids 24 hours a day.