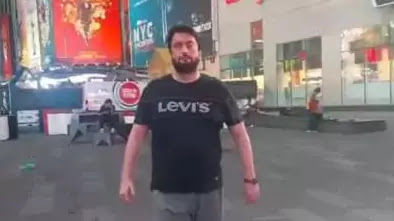 New York – Those who give us lectures, see how their daughters are, PTI leader Shehryar Afridi patrols in New York, comments on American citizens sleeping on the streets. According to details, Chairman Parliamentary Committee on Kashmir Affairs Shahriar Afridi patrolled the streets of the Manhattan area of ​​New York and appreciated the vision of Prime Minister Imran Khan to set up shelters in Pakistan including comments on American citizens sleeping on the streets.
In the video posted on social media, it can be seen that Shehryar Afridi is present in Times Square. Meanwhile, Shehryar Afridi compared Pakistani society and American society in terms of women and said that those who give us lectures, look at the condition of their daughters. Emphasized pride
It may be recalled that Kashmir Committee Chairman Shehryar Afridi has arrived in New York to represent Pakistan at the United Nations. He was stopped for a short time, interrogated for an hour, but was allowed to enter the United States after his documents were verified by the Pakistani consulate in New York.
However, on the news of the search at the New York airport in the United States, the position of Yar Afridi has come. Chairman Kashmir Committee Shahar Yar Afridi has said that the rumors of search at New York Airport are false news, the time spent at the airport is routine because there are rules and regulations of every country. Talking to a private TV channel, he said that Anti-Pakistan elements are spreading false news, I have come to highlight Kashmir cause, enemy elements are afraid of my mission, that is why anti-Pakistan elements are promoting fake news but nothing has to happen with false news