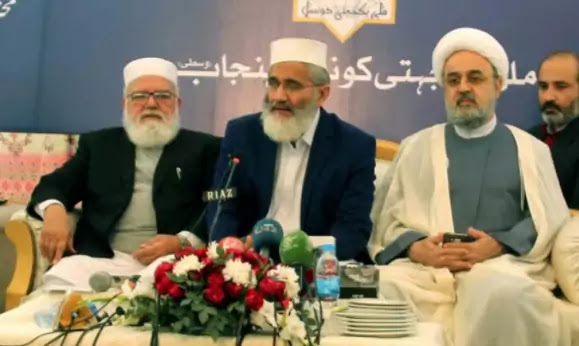 Lahore – Amir of Jamaat-e-Islami Siraj-ul-Haq has said that Pakistan and neighboring Islamic countries should form an economic market together, the curriculum of the Islamic world should be uniform and there should be a joint defense force.
Therefore, the two countries should promote unity, Pakistan should come forward to end the Iran-Saudi distances. The conference of foreign ministers of Islamic countries in Islamabad was a welcome and positive step but it did not achieve the desired goals.
It was said that Islamic countries would announce their recognition of Afghanistan during the conference, but this decision was then handed over to the United States and Western powers.
Is a victim of economic terrorism, the unity of the ummah is the solution to all problems, the problems of Kashmir and Palestine can be solved immediately if the Islamic countries raise their voice together with full force,
He expressed these views while addressing the Wahdat-e-Ummah Conference in Mansura. Secretary-General of the International Organization of Islamic Religions of Iran Ayatollah Dr. Hamid Shahriari was the special guest of the conference.
The conference, hosted by the National Solidarity Council, was hosted by Jamaat-e-Islami Deputy Amir Liaquat Baloch. Maulana Nazir Salami, a member of the Leadership Council of Iran, also addressed the function.
Prof. Muhammad Ibrahim, Deputy Emir of Jamaat-e-Islami, Dr. Farid Paracha, Shaykh-ul-Hadith Maulana Abdul Malik, Ameer of Jamaat-e-Islami Punjab Central Javed Kasuri, Khawaja Moinuddin Mehboob Korea, and eminent scholars of different schools of thought were also present in the meeting.
Siraj-ul-Haq said that the colonial powers have divided the ummah to maintain control over the vast reserves of Islamic countries and to sell their weapons.
As a religious and political movement, Jamaat-e-Islami is playing a role in uniting the nation around the world, including Pakistan, but it is up to the states and governments to do so.
Jamaat-e-Islami believes that Pakistan is a nuclear power and a major Islamic country. As it can do a good job, so to the big strong Islamic countries like Iran, Saudi Arabia, Turkey and Malaysia will have to work harder for the unity of the ummah. Need to end and unite Muslims
Amir Jamaat said that the defeat of the United States in Afghanistan is a piece of great good news for the entire nation. It is hoped that the United States will not dare to attack any Muslim but Afghanistan needs restoration now. Help the Taliban government to lift the people of the country out of problems like poverty and hunger.
Dr. Hameed Shehryari in his speech also stressed the need for unity of the Ummah. He said that if any Shia insults the sanctities of Ahl-e-Sunnat, then it is a crime and a violation of the Islamic motto.
They spread sectarianism through social media by giving money and greed to groups. Julia and secular scholars are also involved in this work. In the Holy Qur’an, Allah Almighty has commanded the Ummah to unite and fight the enemy.
We have to hold on to the rope of Allah together, in which our worldly and otherworldly success is possible. He welcomed the convening of the conference and thanked the organizers and leaders of Jamaat-e-Islami and Milli Yekjahti Council.
Liaquat Baloch welcomed the special guest and other religious scholars on their arrival in Mansura and renewed his commitment to continue his efforts for the unity of the Ummah from the platform of Jamaat-e-Islami.
The conference was also attended by Maulana Ghazanfar Aziz, Pir Syed Safdar Gilani, Asif Luqman Qazi, Allama Syed Sabteen Hussain Sabzwari, Allama Shahid Naqvi, Hafiz Kazim Raza, and other scholars, leaders, and representatives of various religious organizations, Shaykh-e-Azam, and heads of madrassas. Of