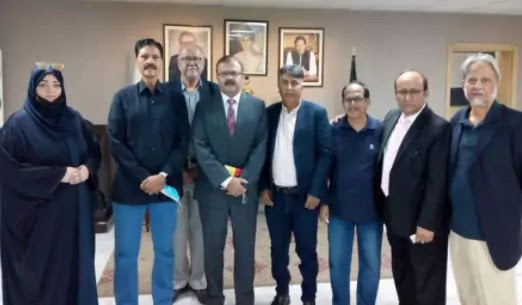 Jeddah – Pakistan’s Ambassador to Saudi Arabia Lieutenant General (retd) Bilal Akbar has said that trade relations between Pakistan and Saudi Arabia are progressing. A trade delegation from Saudi Arabia is going to Pakistan soon, while a Foodex exhibition will be held in Saudi Arabia soon in which a large number of companies from Pakistan will participate. He was talking to Pakistani media here at Pakistan Consulate General.
The Ambassador of Pakistan said that we are grateful to the Government of Saudi Arabia for providing the best facilities to Pakistanis. He asked the journalists to present a positive image of Pakistan. Play your part in improving Pakistan’s economic situation from here attract Saudi investors to invest in existing projects in Pakistan and prove yourself a true ambassador of Pakistan.
Bilal Akbar said that the Pakistani community should promote unity among themselves as it gives a better impression about the homeland in the host country.