Skip to content
HomeLatest NewsSadiq and Amin’s fake certificate taker and giver have met
It also tarnished sacred words like truthfulness and trust, Maryam Nawaz’s response to the meeting between Imran Khan and former Chief Justice 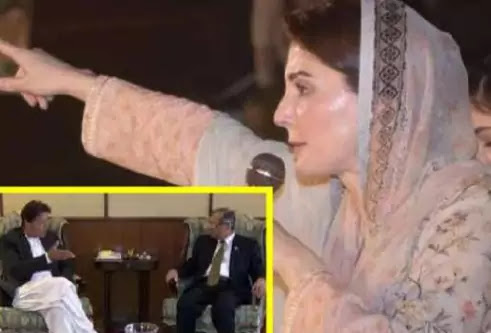 Lahore – Maryam Nawaz says that she also tarnished sacred words like truthfulness and trust. According to details, PML-N Vice President Maryam Nawaz, in response to the meeting between former Chief Justice of Pakistan Saqib Nisar and Imran Khan, said that a meeting has taken place between the recipient and the giver of fake certificates of Sadiq and Amin. In his statement, he said that he also tarnished sacred words like truthfulness and trust.
On the other hand, Interior Minister Rana Sanaullah Khan also commented on the meeting between Imran Khan and former Chief Justice Saqib Nisar and said that “the dust has reached the place where the leaven was”. Became a drop scene of the play.
He said that the certificates of authenticity and fidelity have come together in one place. The nexus of both the artist of New Pakistan and the architect of the dam has come to the fore. ۔
He said that the reality of conspiracy theories against Nawaz Sharif has come to light. It should be noted that former Chief Justice Saqib Nisar has met former Prime Minister Imran Khan. The meeting took place at Imran Khan’s residence in Zaman Park Lahore on Wednesday. According to Saqib Nisar, there was no mention of Punjab during the meeting. Imran Khan was asked not to criticize the judiciary.
The former chief justice said that the meeting was held at the request of Imran Khan and important legal issues were discussed in detail during the meeting. According to sources, a number of important issues were discussed during the meeting between the two leaders.
It should be noted that this is Saqib Nisar’s first significant meeting with any political leader since his retirement as Chief Justice. It may be recalled that in the past, former Chief Justice Saqib Nisar and former Prime Minister Imran Khan had jointly set up a dam fund.