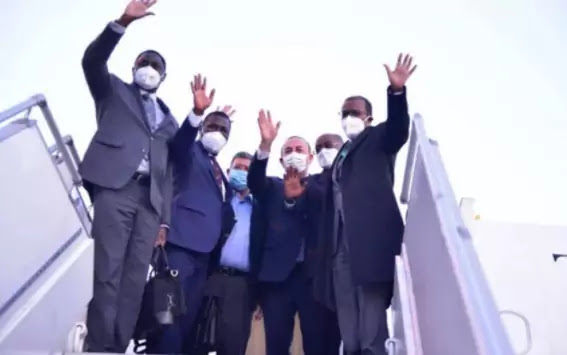 ISLAMABAD – The Foreign Ministers and Foreign Delegates of various Islamic countries, who had come to attend the 17th Extraordinary Meeting of the Council of Foreign Ministers of the Organization of Islamic Cooperation (OIC) on the situation in Afghanistan, have started returning. Minister of State for Information and Broadcasting Farrukh Habib, Minister of State for Parliamentary Affairs Ali Muhammad Khan, and Special Assistant for Religious Affairs and Middle East Allama Tahir Mahmood Ashrafi bade farewell to the guests at Islamabad International Airport. Farewell to the Foreign Ministers of Malaysia, UAE, Bahrain, and Saudi Arabia and their accompanying delegations
Talking to media along with Ali Muhammad Khan and Allama Tahir Ashrafi, Minister of State for Information and Broadcasting Farrukh Habib said that Pakistan has hosted the 17th Extraordinary Session of the OIC Council of Foreign Ministers as the UN reports that The situation of hunger and poverty in Afghanistan is giving rise to human tragedy and paralyzing the system of life.
He said that the Foreign Ministers of most Islamic countries also visited Pakistan under the auspices of the UN Under-Secretary-General and Head of Islamic Development Bank, which has sent a strong message to the whole world. Has called on the world to come to the rescue immediately
Farrukh Habib said that Pakistan has already hosted 4 million Afghan refugees and after the withdrawal of foreign troops from Afghanistan Pakistan has played its key and important role and today the whole Muslim world has gathered in Pakistan to make a strong voice heard from here.
Go to the world He said that many foreign ministers have just left here, including the foreign ministers and delegates of Saudi Arabia, Malaysia, Bahrain, UAE, Azerbaijan, all of whom appreciated Pakistan’s efforts in this regard.
Farrukh Habib said that going to Afghanistan as a united voice of the Islamic world is a great process that has sent a message to those forces who used to say that Pakistan has become isolated. The presence of the IC Foreign Ministers Conference here and the arrival of all Islamic countries in Pakistan is a manifestation of Pakistan’s dynamic and successful foreign policy.
Minister of State for Parliamentary Affairs Ali Muhammad Khan said that after a long time, the entire Muslim Ummah has been happy with the convening of this level conference and the way Prime Minister Imran Khan has spoken on behalf of the Muslim Ummah has made the Muslim Ummah feel. He has awakened that now no problem of any Muslim country is its only problem.
He said that we are proud of the Afghan people who did not accept slavery and its example is before the world but problems have also arisen which OIC foreign ministers on the direction of the leaders of all Muslim Ummah to find a solution.
They were hosted by Pakistan and conveyed a strong message to the world. Minister of State for Information and Broadcasting Farrukh Habib specially thanked the Foreign Ministers and delegates who returned after attending the conference for coming to Pakistan to attend the extraordinary OIC Summit.