Skip to content
HomeLatest NewsReham Khan’s comment on PTI’s defeat in Khyber Pakhtunkhwa local body elections
Spread the love
The PTI, despite having governments in two provinces, including the federation, is suffering the worst defeat everywhere. Tweet of Imran Khan’s ex-wife 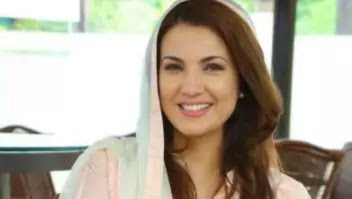 Islamabad – Reham Khan’s comment on the defeat of PTI in Khyber Pakhtunkhwa local body elections. The PTI, despite having governments in two provinces, including the federation, is suffering the worst defeat everywhere. According to details, Reham Khan, the ex-wife of Prime Minister Imran Khan, has also expressed her reaction to the KP local body elections.
In his message on the public relations website Twitter, Reham Khan wrote that “Tehreek-e-Insaf is the first party which has a government in two provinces including the federation but it is suffering the worst defeat everywhere” in his tweet. Also used the hashtag “goodbye selected goodbye”

It should be noted that Jamiat Ulema-e-Islam has the upper hand in the first phase of local body elections in Khyber Pakhtunkhwa, while Pakistan Tehreek-e-Insaf (PTI) is facing upset defeat in many of its strong constituencies. According to preliminary and unofficial and unconfirmed results, the ruling party of JUI-F province was able to defeat the PTI.
According to the preliminary results of the local body elections held in 64 tehsils of 17 districts of Khyber Pakhtunkhwa, Jamiat Ulema-e-Islam (JUI-F) is leading with 18 seats for the post of tehsil chairman while the ruling party PTI is second with 14 seats. Independent candidate came third with 8 seats while ANP also managed to get 8 seats.
PML-N Khyber Pakhtunkhwa has failed to show impressive performance in the local body elections and so far has won only 3 seats while Jamaat-e-Islami 2 and Pakistan Peoples Party have won only 1 seat.
The JUI-F has won the seat of the most important Peshawar city mayor of the province and has won the election by a landslide. Zubair Ali of JUI got a lead of 11,000 votes while Rizwan Bangash of PTI came second.
JUI-F mayoral candidate has been successful in 3 out of 4 major cities of the province Peshawar, Bannu, and Kohat. It may be recalled that polling for Khyber Pakhtunkhwa local body elections was held yesterday after which the results are still coming. Meanwhile, PTI leaders, while reacting to the results, have conceded defeat.
In this regard, senior PTI leader and Senator Shibli Faraz while reacting to the defeat in Khyber Pakhtunkhwa local body elections said that we have learned a lesson from this election, we will change the strategy in the next phase of local body elections. We will maintain the confiscation at all costs.
He said that PTI is a popular party, many people have been given tickets, we have got an opportunity to change our strategy. Shibli Faraz says that we will remove the shortcomings, bring the party workers to the top, PTI has succeeded in some places, we could not mobilize the workers, we have to see what was the weakness in the strategy.
On the other hand, reacting to the election results, JUI leader Maulana Fazlur Rehman said that the election proved that JUI-F is the largest political party in Khyber Pakhtunkhwa. He said that the election results have confirmed his position that the 2018 election was rigged.