Skip to content
HomeInternational NewsRare Arabian deer return safely to the desert
Spread the love
Efforts to preserve endangered Arab deer over the past few decades and bring them back to the natural environment have finally succeeded. 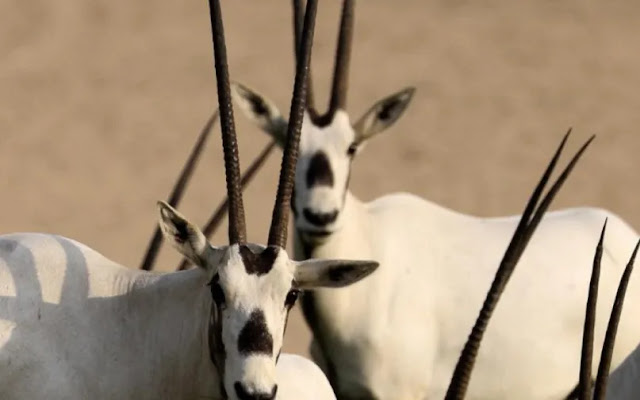 Saudi Arabia has managed to bring back the straight-horned Arab deer (oryx) safely to the deserts.
Many years of deer hunting and capturing have brought the breed to the brink of extinction. The Arabian Peninsula has been home to this deer for centuries. Arabian deer have been struggling in Saudi Arabia and the Gulf region for the past few decades.
Efforts to secure captured deer and return them to the natural environment have finally been successful.
Ahmed Al-Bug, the supervisor of the National Center for the Development of Wildlife Research and Breeding Centers, told Arab News that Saudi Arabia’s experience in conserving Arabian deer has inspired the world.
1200 deer will be released back into the natural environment. He said about 7,000 deer were being kept in custody and preparations were being made for other expeditions to release them in three areas of Saudi Arabia.
Ahmed al-Bouq said that the deer of Arab origin is part of the identity of the Arab world. There are four species of deer in the world, but the Arabian Peninsula is home to the Arabian Orex. This deer is different in size from other species and possesses distinctive features.
Over the years, the programs launched by the National Center for the Development of Wildlife to send deer back to the natural environment have been successful, for which we are grateful to Saudi experts and their partners in the region,” Al-Bouq said.
Ahmed al-Buq added that the process has helped save the deer from extinction in accordance with the standards of the World Conservation Organization. The World Organization’s classification of extinctions begins with complete extinction, extinction in the natural environment but being in custody.
At the beginning of the project, the Arabian deer was in the second stage of classification and its breed was endangered
Ahmed Al-Bouq said that living in the harsh desert environment for centuries, Orex has undergone physical changes which have helped it to cope with the drought and extreme conditions.
This situation has made the deer a unique example of how to cope with harsh environments and climate change. Arabian deer also have the ability to change body temperature.
Despite the fact that the deer is a warm-blooded mammal, it can raise its body temperature to 36 to 44 degrees Celsius. This helps it cope with the heat and cold of the desert