Skip to content
HomeLatest NewsRain of fish from the sky but how is all this possible?
Spread the love 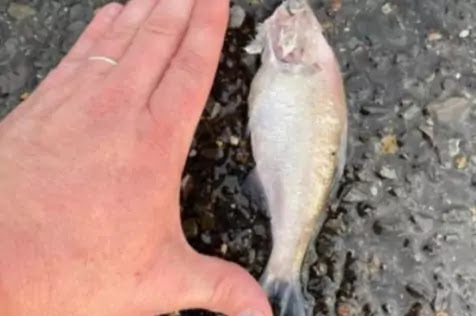 NEW YORK (Monitoring Desk) Clouds do rainwater, but it’s hard to believe that the United States has seen fish raining down from the sky in recent days.
According to the Daily Star, the shocking incident took place in Texarkana, Texas. People spotted hundreds of small fish on the city streets in the morning, even though the city is several hours away from any reservoir.
Read more: A woman who earned millions by selling body gas reached the hospital
People say that it rained fish from the sky at night. One person said that during the night rain it felt like hail was falling, however, when he went outside he saw fish raining from the sky. In a report by National Geographic, experts say that although this is an unusual phenomenon, it is not impossible.
In fact, when water evaporates from an ocean or other body of water and flies into the air, then if there is a strong wind and stormy situation, many small marine animals like frogs, crabs, or small fish also rise and then rain. With fall to the ground
Read more: Melania Trump’s announcement to auction her famous white hat what is the price? The response goes a long way above and beyond