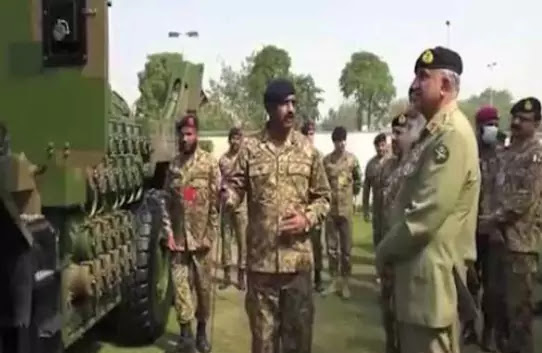 Lahore – Army Chief General Qamar Javed Bajwa has said that national unity is affected by misinformation and propaganda. There should be a joint response. According to Pakistan Army Public Relations (ISPR), Army Chief General Qamar Javed Bajwa visited Lahore, where he attended the inauguration ceremony of SH15 Artillery Guns Corps of Artillery. Javed Bajwa expressed satisfaction over the inclusion of a state-of-the-art weapon system.
On this occasion, he said that the incorporation of the system will help in tackling the challenges in the future war, modern artillery guns are capable of long-range, the incorporation of guns will enhance the operational capabilities of the Pakistan Army.
As per ISPR, Army Chief General Qamar Javed Bajwa additionally visited Lahore University of Management Sciences. On the arrival of the Army Chief, he was received by Vice-Chancellor Dr. Arshad Malik. The head also spoke to students and teachers.
Army Chief General Qamar Javed Bajwa said that Pakistan is rich in talented young manpower, human resources, innovation and technology are crucial for national development, misinformation and propaganda affect national harmony, such conspiracies.
There should be a joint response by pointing out. It may be recalled that a few days ago modern fighter aircraft JTNC has been added to Pakistan Air Force. Modern fighter aircraft JTNC has been handed over to Pakistan Air Force. Prime Minister Imran Khan attended the ceremony as the chief guest at the special invitation of the Chief of Air Staff. Government Ministers, military authorities, and the Chinese Ambassador likewise went to the service.
It was informed that JTNC is capable of targeting from air to land and from air to sea, JTNC has the capability to play a key role in the defense of maritime boundaries Equipped with effective missiles, JTNC is capable of carrying large quantities of military equipment, JTNC is capable of carrying strategic nuclear weapons.
It is learned that there is an option to connect JT-10 fighter jets with JF-17 communicatively. Equipped with a state-of-the-art radar system, JTC has 1400 TRM in radar and Indian Rafale aircraft has 1200 TRM in radar.