Skip to content
HomeLatest NewsPolitical reprisals are being carried out against us Imran Khan
Former Prime Minister Imran Khan has said in a press conference that the present government is trying to eliminate corruption cases against him. 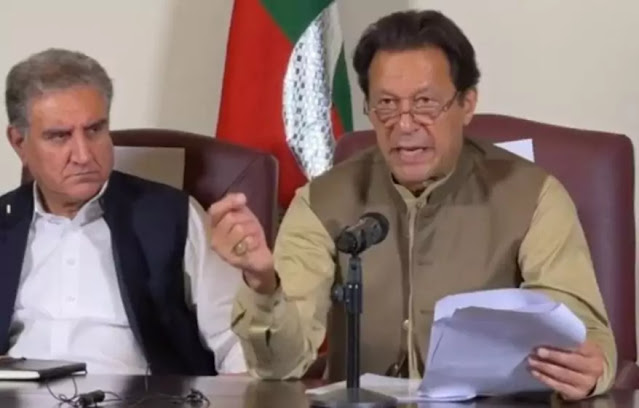 Pakistan Tehreek-e-Insaf (PTI) chairman and former prime minister Imran Khan on Sunday accused the new government of retaliating against his party, saying corruption took place between 2008 and 2018 between the PPP and PML-N.
He said in a press conference in Islamabad that General Pervez Musharraf gave NRO to these two parties which caused loss to the country.
The former prime minister presented a white paper which, according to him, contained details of corruption cases that have been decided, which are under trial and which are being investigated.
The White Paper details cases involving billions of rupees, including 16 cases of money laundering, property in the UK, treasury, and misuse of government funds. He said that between 2008 and 2018, the national debt increased to Rs 30 billion.
The former prime minister said: When we got the government, the current account deficit of 120 billion was the largest in the history of Pakistan.
He claimed that NRO 2 had been obtained and now the former opposition had started trying to eliminate all corruption cases against it.
Imran Khan said that Nawaz Sharif and Maryam Nawaz have been convicted in the cases but they have been released on bail. He said that during his tenure, except for one case, not a single case was registered against the Sharif family.
The former prime minister said that he was bringing out the details because the people need to understand that not only was the government imposed on them from abroad but they would not harm the country. No one should doubt that we are facing the mafia he said.
Regarding the political sloganeering against the government delegation in Madinah, he said that when the prayer service was over at his residence, he found out what had happened in Madinah, and the very next day the PML-N started a movement on social media.
He said No one can think of taking such a step in Madinah and in the house of the Prophet of Islam.
In response to a question, he said that the case against Farah Khan was a simple political act of revenge.
He said that he would like to ask NAB that cases of assets in excess of income are against public officials and not against private citizens. Farah is innocent, I want her to be heard he said.
Asked about the March call in Islamabad in May, Imran Khan said that Pakistanis are angry and this March will see more people than ever before. You will see how the people come out and come out against them. He says political retaliation against him is a challenge for the courts.
The PTI chairman added that protest was a constitutional right of his party. In political life, we have never clashed and never asked anyone to harm anyone. He said that no government has been criticized as much as PTI
He said the court should have dismissed the Chief Election Commissioner only when he said that the institution was not ready for the election as the constitution says that the ECP should be ready to hold the election at any time within three months.
It should be noted that after the success of the no-confidence motion, Imran Khan had expressed his fear that he would be retaliated against and his character would be tarnished. Meanwhile, former interior minister Sheikh Rashid has said that his life is in danger and accused Rana Sanaullah of filing a petition against seven persons at Kohsar police station.
He said that a petition has been filed against seven people including Nawaz Sharif, Shahbaz Sharif, Hamza Shahbaz, and Rana Sanaullah.
On the other hand, Federal Minister for Information Maryam Aurangzeb said in a press conference that Imran Khan’s politics is based on allegations and he did not find any case of corruption against Rana Sanaullah. He said that the PTI government used all institutions against the opposition.
Earlier, Federal Interior Minister Rana Sanaullah, while reacting to the Masjid-e-Nabavi incident, termed former Prime Minister Imran Khan as fitna and gave a clear signal of his arrest.
In a statement, Rana Sanaullah said that there was no justification for not registering a case against those who violated the sanctity of the holy shrine of the Holy Prophet (PBUH).
A case of blasphemy was registered against Imran Khan and others
A case has been registered against 150 unknown persons including Imran Khan, Fawad Chaudhry, Sheikh Rasheed Ahmed, Shahbaz Gul, Qasim Soori, and Imran Khan’s friends Rashid Shafiq, Jahangir Chiko, and Anil Mussarat at the request of Muhammad Naeem, a resident of Madina Town Police Station, Faisalabad. Has been
A case of blasphemy was registered under Sections 295A, 295, 296, and 109 for rioting in Masjid Nabavi.
In his petition, the plaintiff said that he and his friends witnessed this heartbreaking incident in the media on April 29 in which the people of a political party had clearly violated the Qur’anic injunctions by keeping the sanctity and sanctity of Masjid-e-Nabawi.