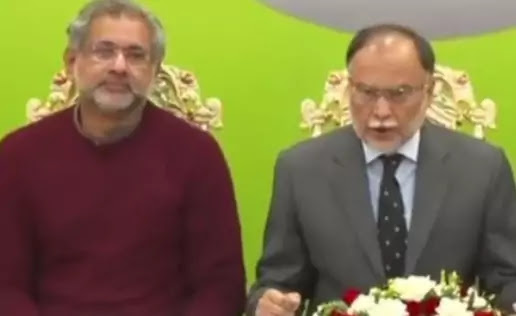 ISLAMABAD – Pakistan Muslim League-Nawaz (PML-N) has termed the approval of the money budget by the National Assembly as controversial. Shahid Khaqan Abbasi has said that the government has gained a numerical advantage over telephone calls.
According to details, the PML-N termed the approval of the Finance Amendment Bill by the National Assembly as illegal. In a press conference with PML-N leaders on the violation of rules in the passage of the Finance Amendment Bill, former Prime Minister Shahid Khaqan Abbasi said that the legislation was passed in a hurry.
The government got a majority on telephone calls, the government that claimed to bring in 200 billion, of which 100 billion we were going to hit in the face of the International Monetary Fund (IMF). It hits us in the face and does not give
Shahid Khaqan Abbasi also sharply criticized Speaker Saad Qaiser and said that today no law, constitution, and parliamentary tradition is taken care of and this is the reality of Pakistan’s parliament.
He said that the SBP bill is also a dangerous bill in that we are handing over the key of our economy to IMF and other institutions. No, the bill was passed at 11pm without debate and without a vote
Former Planning Minister Ahsan Iqbal said that January 13 is a dark day in the history of Pakistan, the day the government imposed additional taxes of Rs 350 billion on the people and bulldozed the State Bank Bill to surrender the financial sovereignty of Pakistan.
The finance minister was showing the picture of paradise six months ago, now the last drop of blood of the people has been squeezed by bringing money budget. Six months ago, the same finance minister was saying in his budget speech that we have strengthened Pakistan’s economy. Yes, either your claim to paradise that you were showing six months ago was false or the step you are taking now is an injustice to the nation.
Former Finance Minister Muftah Ismail has said that the IMF has reduced the deficit. He suggested that the government should reduce its expenditure to reduce the deficit, but the government imposed billions of rupees in taxes on the people.